What Do Swimmers Do for a Challenge?

Sports provide a way for us to do far more than merely train our bodies to be healthier and more physically fit. They also offer a way for us to challenge ourselves mentally, and to strive to achieve incredible things with our bodies. In some pursuits, these challenges are easy to see and quite well-known. For runners, there are all kinds of races, with the marathon (and the super marathon) holding one of the top titles for prestige. If you can run a marathon, people know that you've mastered your running ability. For cyclists, riding in a stage race or travelling 100 kilometres without stopping offer the same kind of challenge.

What about for the swimmers of the world? What types of challenges are out there to test the most determined hardcore swimmers? While there isn't anything as easy to point to as a marathon, there are still plenty of competitive ventures that take place in the water. From indoor pool races such as those held at the Olympics to gruelling open water swims in some of the most challenging areas around the world, there's no shortage of excitement to be found here as well. Here are the swimming challenges you should know!

Ask any swimmer what they consider to be one of the hardest races you can do in an indoor pool, and chances are you'll hear this answer: the 400-metre individual medley. Not only do you have to criss-cross the pool eight times in total, but you have to be proficient in every major stroke category at the same time. Performing well in this race requires a mastery of a variety of swimming skills alongside peak physical conditioning. Otherwise, it's all too easy to fall behind and lose pace with the swimmers in the other lanes.

Add in the complication of Olympic pressure, and you have one of the biggest challenges in the swimming world. This event truly separates the good from the great. With cheering crowds and a medal on the line, racers need to keep their cool while remembering proper form and pacing. A gold here is the mark of a true champion.

On the subject of indoor swimming races, not all the toughest challenges need to take place on an Olympic stage to push swimmers to the limit. The 1500 metre freestyle is one of those races that push the limits of a swimmer's endurance, especially if they focus primarily on indoor pools. This race is not gruelling just regarding the overall length, but also in terms of how much time it takes to swim. With times that vary from 15 minutes to more than 30 for the slowest swimmers, it requires you to stay engaged with the swim and in "race mode" for a substantial amount of time. As a result, few swimmers opt to make this one of the events they compete in each year if they can help it. It's not a favourite except for those who love the tough pacing required in these long endurance races. That said, it's a serious challenge — even a marathon runner would struggle in the water. 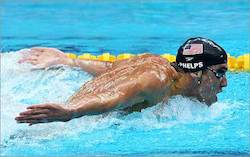 At first, this race seems deceptively simple, perhaps even easy. Only 200 metres? That should be easy for most swimmers, right? It might be until you consider that in a racing environment, the butterfly becomes one of the most challenging strokes. Not only will you expend a ton of energy trying to stay ahead of others, tiring your legs and arms rapidly, but the other swimmers in the pool make this stroke more difficult.

Think about it: the turbulence created in the water by so many swimmers aggressively using a stroke that relies heavily on displacement means you'll have to fight against the water, too. By the final turn, the waves across the length of the pool can be pretty intense. That means this requires endurance on several levels, plus superior breath control. That ranks it high on the list of swimming challenges.

This is a "holy grail" for many swimmers, although it is an incredibly difficult feat to accomplish. First performed in the late 19th century and ultimately growing in popularity, this 21-mile swim between the English coast and the shores of France has captured the imaginations of many. Today, while hundreds of people have accomplished the feat, it remains one of the toughest challenges in sports. The unpredictable weather, sometimes vicious tidal currents, and the possibility of encountering jellyfish all combine to create an extraordinarily tricky swim.

That said, some of the earliest successful swimmers completed their swims with only a minimum amount of training. Then again, it did take them sometimes upwards of 24 hours to make the entire crossing! Today, the record for the fastest channel swim belongs to Trent Grimsey of Australia, who finished in just under seven hours. There are some who love this challenge, too — like Alison Streeter, who crossed the Channel 43 times! 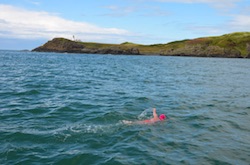 What if crossing the chilly waters of the English Channel wasn't enough of a challenge for you? What if you wanted something even colder and potentially more hazardous? Well, you won't have to go very far — many people like to try tackling a North Channel crossing, which takes place in the watery gap between Scotland and Ireland. The history of swimming the North Channel is considerably shorter than that of the English Channel, with the first victory occurring only in 1947. Today, both men and women have managed the crossing, usually in about 10 to 12 hours. The cold water and the presence of many more jellyfish often mean swimmers must be careful to avoid hypothermia or painful stings.

This annual swimming challenge in Hawaii offers much warmer waters and more beautiful scenery than you might get trying to cross the dreary North Channel. Though the Waikiki Roughwater Swim only covers just over two miles in distance, it takes place in open ocean waters. A rough chop is typical, with rougher seas possible as well. Combined with the strong currents that flow around the Hawaiian Islands and swimmers will have to fight with all their might to make it the entire distance and claim victory.

This swim was once a part of the original Iron Man triathlon. When the competition was first ramping up decades ago, this swimming course was what the competitors used for their swimming portion. If you want to push yourself, why not try the course that kicked off a fitness dynasty? Many athletes make the trek every year to swim en-masse through Hawaii's beautiful seas.

Swimming the Strait of Gibraltar 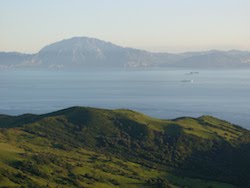 This tricky strait remains unconquered by the masses, with only about five hundred confirmed completions since records began. Though the Strait of Gibraltar only spans about nine miles in total distance, this border between the Atlantic Ocean and the Mediterranean Sea experiences powerful currents that can quickly push swimmers off course. As a result, the total distance from shore to shore is often much larger than the official nine-mile span. Swimmers who want to undertake this challenge must wait for the right weather, train hard, and prepare to spend many hours in the water before they emerge victoriously. With fewer people attempting this feat, it remains one of the jewels a swimmer can reach for to prove their abilities for the ages.

There are many other challenges, too

If one thing is true, it's that swimmers exhibit almost as much of a crazy desire for punishment and challenge as runners. While these races and feats are all incredible, they're just a scratch on the surface of the true depth of challenges in the swimming world. From swimming between the Hawaiian Islands to taking a dip in the waters around the North Pole itself, there is always someone out there looking for a way to push their body even farther. Next time you feel like tapping out fifteen minutes into your swim, remember — you could be facing the entire width of the English Channel instead! While you may never undertake that task yourself, always look for ways to keep putting yourself and your swimming abilities to the test.

This article was written exclusively for Sports Fitness, an online shop where you can order all your swimwear and accessoires with fast worldwide delivery.