The store will not work correctly in the case when cookies are disabled.
Menu
Account
Settings
Currency
GBP - British Pound 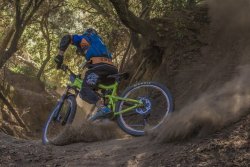 Bike technology and design is always evolving as we see new trends and developments arise each year. Therefore, within this blog post we are going to explore the top 5 mountain bikes which are already released for 2020. We will look into what sets them apart from the rest, what enhancements they have received along with the average price for each model. The bikes in particular which we are going to look at today are:

The first mountain bike we are going to explore is the Specialized Enduro models. There are a number of bikes under this branding which all differ in spec and price, with the Comp 29 starting at £4,500 and the S-Works 29 stretching up to £9,000. Despite these differences in cost, the main template of the bikes remains the same. The bicycle is made from an all-carbon frame construction that reduces the weight by 250g. As well as this the suspension layout has been altered to accommodate its 29inch wheels with 170mm travel which can be updated at any time thanks to the versatility of the Specialized frames. There is also a flip-chip in the shock eyelet which offers two geometry settings for the mountain bike.

Next on the list is the 2020 Trek Top Fuel mountain bike which boasts a range of models brought out this year. The lowest price bike you can pick up is the Fuel 8 which is £2,600 and the highest end bike is the Fuel 9.9XX1 AXS which comes in at £9,250 for the highest spec. The Trek Top Fuel bikes have received a complete chassis upgrade with a focus on downhill rides. The travel of the bike has been updated to 120mm in the front and 115m in the back and as well as this the slacker trend has been lowered for an updated frame geometry. Just a few examples of how this bike has been updated to accommodate for downhill trails is the fact that the handlebars have been widened, there are shorter stems, dropper seatposts and a TwistLoc dual remote lockout.

We are now going to look at the latest release from KTM which sees them achieving the lightest weight possible for 2020 on their Sonic Scarp models. This 2020 launch for KTM sees the full suspension XC bike weighing in at under the 10kg limit. Shaving off 200g from its predecessor, this bike has a curved down tube which ensures that there is more than enough space for two bottle cages in all frame sizes. The KTM bikes are known for their use of the SLL rear suspension which in this bike produced 95mm travel in the rear and 100mm in the front.

Second to last, we are going to look into the latest launch from Santa Cruz for 2020 which is their Hightower. This bike is closely compared to their Megatower but boasts a range of improved and updated aspects which makes it more trail focussed. For this bike you can purchase the cheaper C range for around £3,099 which has an aluminium frame and their top range bike contains a heavier CC frame which is made out of carbon. When looking at the spec of this bike, you can see that a variety of changes have been made to improve its performance on the track. The shock layout of the bike has been created using a lower link to drive which in turn improves the VPP suspension of the bike. As well as this, the travel on the rear of the bike is 140mm and the front has 150mm. Along with the upgrade in travel, there is also an adjustable geometry flip chip.

2020 has also seen the launch on the Scott Contessa Ransom which also includes a women’s specific variant which is something not often considered by manufacturers when it comes to new bike launches. The framework used on both the men’s and women’s bike are exactly the same with the added option of colour ways. The women’s bike however has a couple of adjustment made to it to make it more suited to ladies such as customising the tuning of the damper. On the Ransom 901 the travel of the bike is 170mm and it weighs in at 14.1kg. As well as this the bike has features such as Shimano XT brakes and Twin-Loc. The flip-chip on the bike also allows you to customise the driver and fine tune the geometry of the bike and the position of the seat.

What Mountain Bike Do You Use?

Within this article we have looked into the recent mountain bike releases and how the technology is evolving. However, we want to know if you have upgraded to any of these bikes and what you think of them. Or if you are an avid mountain biker, let us know what your go-to bike is for the tracks. Don’t forget that you can kit yourself out with all of the latest cycling clothing and gadgets over on our online store Sports Fitness and start the New Year off in style.

Want to get fit but struggle with exercise?