The Top 10 Half-Marathons Found Around the World

The marathon is the gold standard of endurance tests for runners. Individuals who can set out at the starting line and make it to the finish line 42 kilometres later, no matter how long it takes, have achieved something great. It's tough to train straight up to the marathon level, though, and the gruelling test it poses isn't for everyone. The half-marathon, instead, is the better choice: it offers a more manageable distance while still posing a substantial challenge.

All around the world, thousands of half-marathons take place every year. Which ones stand out from the crowd as something truly spectacular or unique? Let's spin the globe and take a closer look at ten of the biggest, best half-marathons you'll find worldwide.

1. Chase away winter blues with the Bermuda Half-Marathon

One of the very first major events of the year, the Bermuda Half-Marathon allows runners to escape the winter weather and head to a place where tropical warmth dominates all year round. Here, you can choose from a variety of races, including the half marathon. For the overachievers out there, there is even a special prize available for individuals who can complete the big three races (a 10k race plus the half and full marathons) before the event weekend concludes. The beautiful views of the Atlantic Ocean and the famously pure white sand of Bahamian beaches make this not just a big draw for runners every year, but a unique opportunity to race in a special place.

2. Take in stunning views in Tanzania with the Kilimanjaro Half-Marathon

Of all the sights to be seen in Africa, Mount Kilimanjaro is perhaps one of the most stunning. Towering above the landscape with its snow-capped peak, it forms the backdrop for the eponymous half-marathon that runs from a nearby stadium to the base of the mountain. A significant benefit of this half-marathon: its course mostly covers flat ground, which means that even more amateur-level runners should have no trouble tackling the course. The high altitude can be a challenge for some, but overall, you'll find this to be an incredible experience from both a personal fitness and a cultural point of view. With unique sights such as local plantations and homes along the way, you're sure to enjoy your time in Tanzania.

3. Trek through a challenge half-marathon on the Great Wall

Built to keep out Mongol invaders centuries ago, the Great Wall of China is known around the world for its fascinating history and its incredible length. Luckily, when all you want to do is run a half-marathon, you won't need to think about traversing the whole wall. This massive half-marathon takes place in May of each year and sees runners tackling quite a diverse course that spans everything from portions of the old Wall itself to modern and smooth asphalt roads. Bring a sturdy new pair of running shoes and plenty of endurance if you plan to tackle this half-marathon. Be prepared for altitude changes, too — at one point, the course declines almost 700 metres back towards sea level.

4. Wine-lovers will find tons of fun at the Napa-to-Sonoma Half-Marathon

Next on the list, we head to America for the first look at a half-marathon run in California. The Napa-Sonoma race takes place typically in the summer — but don't worry, the pleasant West Coast climate means that temperatures remain bearable for racers throughout the course. As you run the course, you'll pass not only many beautiful farms, but you'll also run directly through some of the major vineyards in the area. With the undulating course, welcoming climate, and the presence of many other friendly racers, the distance will whiz by until you finally reach the finish line. Organisers of the race ensure that participants get a chance to experience the produce of America's wine country first-hand. You'll get to enjoy a glass after you catch your breath.

5. Soak in ancient history during the Petra Desert Half-Marathon 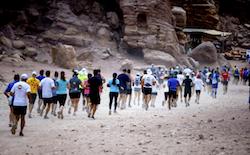 Neither the nation of Jordan nor a desert setting might be the first places you'd think of participating in a half-marathon, but this trek through the desert allows you to view some stunning ancient ruins from the city of Petra. The unique scenery and "once in a lifetime" opportunity to see these places up close are prominent factors contributing to its popularity among runners. That said, it's no picnic. Due to the rough nature of the terrain, you can expect more than one or two punishing climbs that will make you wonder if you put enough endurance training onto your race calendar.

6. Visit the end of the earth to run in Patagonia, Chile

Regarded as perhaps one of the most beautiful race running courses in the world, the Patagonia International races occur just as the spring begins to end in the southern hemisphere. That means the perfect weather to go for a long run: not too hot and not too cold. With the majestic Andes mountain range looming in the distance, you'll trace a long course that stretches past unspoiled lakes and forested terrain that is truly unlike any other place on Earth. The course rolls with the landscape, so you can expect to get plenty of use out of your descent practice sessions.

7. Jet to the Pacific for the Maui Half-Marathon

Hawaii is a dream destination for many, and for runners, it's no different. There's no shortage of races that take place on all the islands throughout the year, but October sees Maui turned into the site of one of the best races in the United States. With the beginning and end of the race at the same place, you'll be able to see many of the best sights in Maui, including one of the oldest villages on the island. With the salt spray in the air from the ocean and the welcomingly warm weather, this is another one to strive for when you want a unique race that isn't too difficult.

Las Vegas isn't typically the name people associate with fitness and exercise, but once a year, the city shuts down the famous Strip filled with the biggest casinos to make way for a gaggle of runners. With a "Rock n Roll" theme, this is one of the craziest and most intense races you can participate in Stateside. A concert with major artists kicks off the race, and live music lines the race course, so there's no need to pack in your earbuds and music collection. Participants are entitled to exclusive discounts on some area attractions — if you still have the energy for the Vegas nightlife after a half-marathon, of course.

9. Find your way over the Golden Gate Bridge during the San Francisco Half-Marathon 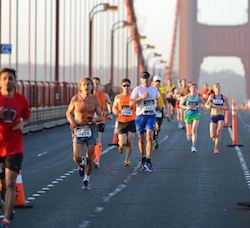 Another excellent opportunity to visit a unique location and enjoy the local flavour occurs in San Francisco towards the end of each year. A portion of the Golden Gate Bridge closes to traffic and opens to those on foot as runners make their way from one side of the bridge to the other during this race. Drawing thousands of racers every year, it's a fun chance to see some of California's most famous locations up close and personal while pushing yourself to tackle the hilly terrain.

10. Cap off the year with good weather & music at the Reggae Half-Marathon

With the winter settling back in, take the opportunity to escape one more time before the snows arrive. This race in Jamaica is a famous local affair with an early start time that will see you racing the rising sun. With a festival-like atmosphere, you'll get to mingle with fellow racers and the locals as you all come together to celebrate and then race early in the morning. With unique characters common to the island and clear blue waters to enjoy before and after your half-marathon, this is another race runner's dream.

Where will you find your adventure?

These ten may be some of the biggest and best half-marathons in the world, but it would be disingenuous to say they're the only ones. In fact, you're sure to find even more unique and thrilling opportunities as soon as you begin to look. Are you thinking about putting in the work to master the half-marathon? Make one of these races your ultimate goal and give yourself some serious motivational power.

This article was written excludively for Sports Fitness, an online store where you can shop for running clothing and accessories - get kitted out for your next run now!