Badminton can be played one on one or in pairs which makes it such a versatile way of exercising and it is such an enjoyable activity to take part in for all ages. From being introduced to the sport at school to practicing your skills in the gym or recreationally at home, you are sure to get a great level of satisfaction out of the game, and we are here to give you the low down on the two main ways you can play badminton.

Throughout this article we will investigate the differences and similarities between the two ways of playing and help you to identify which you would prefer to practice. Progression is very highly sought after in badminton as playing professionally could eventually earn you a spot in the Olympics.

Whether you are playing solo or as part of a team, badminton has a fantastic impact on your overall health as it is an intense activity that can be carried out over a long period of time or in short bursts if playing a quick match in your garden.

Underneath the fact of how the game is played, the action of taking part in the activity does also improve your health. As you will be very active on the court, it is believed that badminton burns approximately 450 calories per hour so may 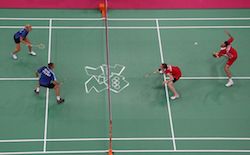 even benefit you in the long term if you are looking to lose weight as well as enjoy the sport. As this is a cardiovascular game, it also works your body intensely over a long period of time in order to help you maintain a healthy heart.

Practicing the sport will also benefit your level of concentration and anticipation as you aim to predict your opponents next moves. You will find that this improved level of mental activity will benefit you in the game and in general day to day activities.

Although the game is played in two ways, there are still so many similarities between them when it comes down to basics. Below are a few of these key instances of this:

Badminton is played on a rectangular court with a net through the middle of it. The players stand either side of this net with badminton rackets to hit the shuttlecock with. The main objective is to hit the shuttlecock over the net into the oppositions side on the court, keeping it out of their own area and aiming to score, however if it touches down outside the marked boxes, it is classed as ‘out’ so will not go towards the main score of the match.

When it comes to the basics of badminton it is the same in both singles and doubles. Whereby the way to score is to be able to only hit the shuttlecock once to pass it over the net. And then this would need to land within the box without the opposition intercepting it. However, if they hit it back, it becomes a rally where it is back and forth until someone misses the hit.

And after each rally, the players move to the opposite side of their portion of the court. For example, if you were playing singles you will swap from the right half to the left half of your area. And for doubles, they would move to their partners spot, so that the winning team’s server can serve again but to a different opposition team member.

When it comes to the main differences between singles and doubles there are some very obvious features and some not so well known. Just a few are listed below:

Singles is more based on your own technical ability and stamina as one person needs to cover their side of the net. Whereas when playing doubles the area is split between two players and focuses more on teamwork and communication to score.

Although the court is the name, there are different markings used to accommodate for the number of players. E.G the larger outline splits into two where the net is placed and then each half is then split into half again for each of the team members to take their places.

It is believed that by playing singles, your heart rate will generally be at a higher level to those with a partner. This is because when you are on the court by yourself you will find that you are moving around a lot more compared to when the space is shared as a couple. There is also a more social aspect to being part of a team compared to training by yourself, so you will find that moral is boosted more as a duo.

Which Do You Prefer?

Depending on your preferences when it comes to playing badminton, you can opt to have a partner or go it alone. These are mainly the two differences between the main types of this sport. If you find that you are better working in a pair and sharing the responsibility of scoring, then doubles is definitely something to look at. The awe of teamwork is both motivational but also helps you cover more of the court than when you are based by yourself.

However, if you have increased stamina and agility, you will find that working by yourself is easier. And you will need heightened concentration to try and gauge where the shuttlecock is flying towards in order to intercept it before it hits the floor.

If you are looking at starting fresh in the sport in order to progress further or whether you are after just playing recreationally, let us know which of these types you would most likely want to try! Find us over on our social media pages and give us your opinion on this, we would love to chat. You can also checkout our Sports Fitness site where you will find all your sports needs from rackets to shuttlecocks, we have everything you need to start you off on our badminton journey!

This article was written by Loren Astbury for Sports Fitness. Shop with us for all your badminton equipment including rackets and shuttlecocks.