Retro Workouts – The Old New Way Too Get Fit!

It is April 2020, most of the world is in lockdown. Gyms are closed and some countries are even stopping residents leaving their homes to take daily exercise. In the midst of the Covid-19 pandemic, many people are turning to old-school exercise videos to maintain their fitness and workout within the confines of their own homes. Over recent years there has been a slow and steady reintroduction of retro fitness into trendy City gyms, however this has quickly snowballed into a major phenomenon for the masses.

From New York to London, inner city gyms are always looking to introduce new trends to keep fitness fanatics interested. In London Gymbox’s Gymnasium has been a huge hit. 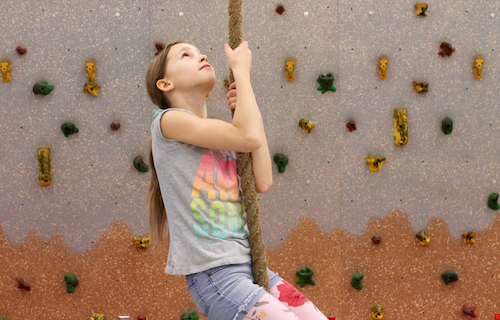 The Gymbox classes are inspired by retro PE lessons. Many of us shudder at the thought of school PE, so how is it such big business?

Nostalgia is the simple answer. Even if we didn’t realise it at the time, being a child is often one of the most amazing times of our lives. Even those sweaty PE classes invoke powerful memories. With Twitter feeds full of ‘adulting’ fails, and Peter Pan style refusal to grow-up tweets, a surprisingly large number of adults are clamouring to revisit this childhood experience and take part in retro PE lesson style workouts.

This specific class includes equipment such as monkey bars, vaults and ropes to climb. The nightmare of most people’s youth, but an extremely popular addition to the Gymbox fitness class schedule. Such activities are great workouts, particularly under the tutorage of a fitness instructor that won’t tolerate slacking off or teenage style excuses.

In the USA there is the Retro Fitness franchise that offers many different class styles. Tapping into some of the most popular fitness trends Retro Fitness has classes to suit most people’s preferences from dance through to step classes, yoga and body combat. There is sure to be a class style to suit you, there are locations across America with more opening up regularly.

Due to the Coronavirus pandemic, fitness fanatics around the globe are exploring different options to meet their exercise needs. While cyclists and runners are heading out where permitted to enjoy their allotted daily exercise, gym and fitness class goers are looking for alternative ways to stay fit.

In 2020 most people are used to turning to YouTube where there is an array of videos covering fun, education, fitness and everything in-between. There are new workout videos added to YouTube every day but there are also hundreds of retro fitness videos that are suddenly surging in popularity. Some names to search for are listed below. 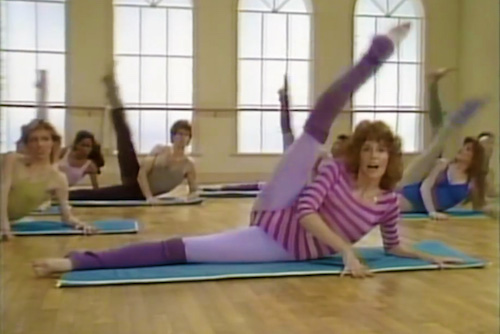 Queen of fitness, the Jane Fonda 1980’s workout videos, literally VHS videotapes, are as iconic as it gets, and making a huge comeback. Well not the VHS tapes, but the workouts which can be streamed via various services including YouTube. Many hardcore gym goers may be cynical about the benefits of doing a 1980’s workout lead by a brightly coloured Lycra clad overly enthusiastic middle-aged lady, but the recent comments left on this particular video suggest this is as hardcore as it gets! Review after review suggesting that the video is certainly not beginner level, with words such as ‘intense’ and ‘rigorous’ appearing frequently.

Derrick Errol Evans, more often known as Mr Motivator is an icon of breakfast TV of the 1990’s in the United Kingdom.  He was well known for his appearances wearing fluorescent Lycra motivating the nation to get moving with energetic morning workouts paired with high-energy music. In addition to the workouts on GMTV, he also released several fitness videos. A YouTube search brings up hundreds of results for ‘Mr Motivator’ including this hour long Body Conditioner from 1994.

If you are nostalgic for Mr Motivator, he has made his UK television return, on HealthCheck UK Live, a BBC programme to help support the health of the nation throughout the Coronavirus UK lockdown. Health has always been a big focus for Derrick, and over recent years he has been an advocate for mental health and wellbeing, and this will be a big part of his TV appearances over the coming weeks. 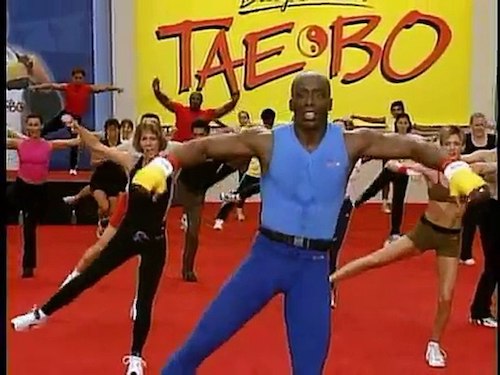 An American fitness guru, Billy Blanks created the Tae Bo program. Tae Bo is a martial-arts based full-body fitness program initially developed in the 1970’s. Combining kicks and punches with music and dance, Tae Bo was a slow burn, that rocketed to success in the 1990’s when a series of videos were mass-marketed. Tae Bo had a pop culture success that still lives in the hearts of Americans from that generation.

If you’re not American and have never heard of Tae Bo this is easily rectified with a YouTube search, where you will find plenty of Billy Blanks original workout videos to try.  These videos have seen a resurgence in popularity over recent weeks, with followers reminiscing about the old days and how tough the workouts are.

Billy Blanks himself, now 64, has launched some new videos specifically for the current quarantine situation. ‘In the Living Room with Billy Blanks’ is an online series of new videos aimed at helping to keep Americans fit while self-isolating at home. Have you tried the new Billy Blanks workout? Look us up on social media and tell us what you think.

Debbie Reynolds was a well-known American actress who sadly passed away in 2016. In addition to a huge repository of films that she appeared in, including ‘Singin’ in the Rain’ and ‘How the West Was Won’, she also had her own TV show ‘The Debbie Reynolds Show’ and in 1983 she released the hugely popular ‘Do it Debbie’s Way’ exercise video.

Do it Debbie’s Way was a light-hearted exercise video, filmed when the star was 51. In the video Debbie wears a lowcut leotard with matching choker and belt to highlight her figure. This is not the frantic, energetic workout of Jane Fonda, this was specifically designed for the older lady, she boldly states that she ‘hates exercise’ during the hour-long video that includes ab curls, leg lifts and tummy twists. At the time of writing the full Do it Debbie’s Way is available to stream for free on YouTube. 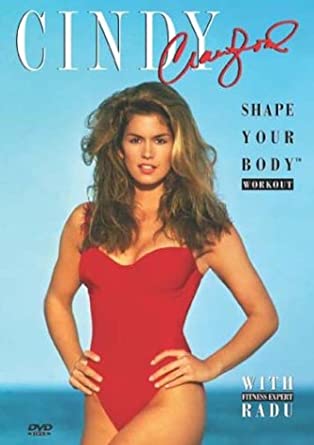 An American supermodel Cindy Crawford released four fitness videos between 1992 and 2001.  With an amazing figure, and being a fashion influencer, many women wanted to the know the fitness regime of Cindy Crawford. Her first video Cindy Crawford: Shape Your Body, was criticised from a safety perspective by some, but was hugely popular around the world.

To the modern woman the video may seem far too gender stereotype orientated, and some of the exercises need to remain in the 1990’s with little to no actual benefit by modern standards. However, the majority content of the video is based on staple exercises such as bicep curls. During isolation with no access to expensive gym equipment for the majority, this Cindy Crawford classic may be a fun addition to your routine. Even better, you can stream the complete workout for free on YouTube.

Retro fitness trends have been making a comeback for several years, as can be evidenced by the retro gym classes popping up in trendy city gyms around the world. However, these strange times of social isolation has opened up the opportunity of real retro fitness gurus making a comeback.

Today’s children will be looking back fondly at Joe Wicks who is providing free daily PE classes for kids. Take this opportunity to step back into your youth and stream the exercise video of your favourite fitness guru from the 1980’s or 1990’s. There is even a surge in sales of brightly coloured leotards and leg warmers to make the experience even more authentic! Skimpy leotards are of course optional, the important thing is to give it a go, get active and get involved to help keep your physical and mental health in shape during the Covid-19 pandemic.

If you need a refresh of your workout wardrobe, or some home exercise equipment take a look at the Sports Fitness online shop where you will find a great selection available.