Runners are nothing if notdedicated. All it takes is one look at the crowds that turn out to run a marathon to see that on display. Speak to one of those runners about the type of shoes they wear or the clothes they buy for racing, and chances are you'll get quite the long-winded answer. Exercise science has had a profound effect on running culture. While many, perhaps even you included, still run simply for fitness and only think about the science in relation tothe gear they buy, others have continued looking for ways to enhance training methods and produce more engaging workouts.

In other areas of fitness, that has led to the creation of all kinds of different training classes and programs. Today, there is a new type of fitness class on the rise in several select locations that aims to bring science and structure to the running workout. Called precision running, it’s primarily foundin the high-end fitness clubs run by a company called Equinox, one of which can be foundin the heart of London. Precision running is all about reinventing the way people interact with the treadmill. Rather than simply focusing on turning the machine on and doing your miles, precision running aims to extract the most benefits possible from your time on the tread. What should you know about this exercise, and why is it worth someone's time and effort? 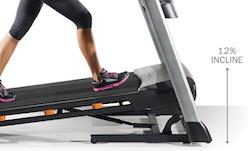 First, think about the way a treadmill works. These days, it's about more than just turning the machine on and running on a flat surface. Modern treadmills have a robust ability to emulate the increased effort of running on an incline outdoors. While it doesn't offer allthe same benefits as outdoor running, it’s a close approximation. Running with different incline settings can help you to develop your body and challenge your limits. For that reason, precision running focuses on building a workout around the idea of intensity intervals defined by speed and incline. By changing the incline percentage and asking you to run at varying effort levels, the instructors put your body through a more rigorous workout than you'd get witha steady pace outdoors.

Each precision running class takes place over 50 minutes. Now, you might say: “less than an hour? I go on runs much longer than that!” While that might be true, you won't have the same experience. Every beginner to the class starts out by determining their baseline, called their one minutepersonal record. The instructor asks you to set the machine to a 6% incline and run at your best speed for one full minute. Thisisn't an all-out race. Instead, you should set your PR where you know you're near your limit. If you push yourself to the max, the rest of the workout will be much more difficult.

This PR is the basis for all your future precision running workouts. For example, you might be asked to run for several minutes onan incline, at 20% of your PR speed. Over time, the distance will increase, and the incline percentage will decrease. You'll come to find this is a tough, punishing workout — but the goal is not to break you. Instead, instructors will take you close to your limit and then allow you to cool down and catch your breath. The result is a highly effective workout that rapidly builds endurance over time and inspires you to understand the mechanics of your body betteras it runs.

For whom is precision running best suited?

So, for something that sounds so intense, surely it's only for the most hardcore runners out there, right? It is easy to think that, but it is actuallynot correct in this case. In fact, precision running began as a way to give runners of all skill levels a place where they could train together in harmony. Rather than holding each other back, everyone receives their own individually tailored routine based ontheir personalrecord. All the runners in a class may receive the same set of instructions, but the actual effort level will vary based on the level of skill you demonstrated in your first session.

For the beginning runner, this can be an important advantage. Often it feels like you must run by yourself when you're a newcomer to the sport. Everyone else leaves you in the dust, and you may not want to make others run a slower pace to keep up with you. As everyone in a precision running class takes part for the same amount of time, there's no reason to worry about that. Veteran runners have an opportunity to share tips and tricks with others in the class. Group classes are popular for a reason, after all, whether it's running or dancing for fitness. Being able to give and receive encouragement makes it less stressful and unpleasant to endure the difficulty of exerting yourself so strenuously for 50 minutes. Meanwhile, everyone also can gain some serious benefits.

The core benefits of precision running 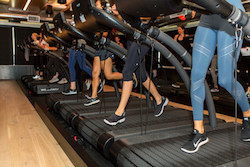 Speaking of the benefits, what are they? Besides the camaraderie of the group atmosphere, there are the physical perks of such an intense workout. As mentioned above, endurance is one of the primary things you'll gain by running in one of these classes, but it isn't the only one. In fact, the goal of precision running is to improve your abilities overall, not in one particular area.

Those who've participated in precision classes say that one of the most surprising benefits they experienced was the development of an innate sense of effort when running outside of class. In other words, students were able to determine betterhow far and how fast they could run that day. Because the class helps you understand the different ways your body responds to varying effort levels, you can turn around and apply those lessons to road running.

For example, say you're practisingfor a half-marathon, andyou need to tackle a tough hill on your running course. After precision running, you can better understand how hard you need to run up the hill to maintain your current pace and effort level. Translating that intorace day gains is not a difficult leap to make!

Could you do this on your own?

What if you don't live near an Equinox gym, and you can't find any similar classes on offer in your regular  gym? Could you reserve your favouritetreadmill in the gym and try making your own precision running experience for yourself? Yes and no. Technically, nothing is stoppingyou from such a pursuit — the settings are the same on every treadmill, and you could even clock your personalrecord on your own.

However, from there, things get a bit trickier. The instructorsproviding these classes at Equinox likely use a special approach they've tried and tested for efficiency. The process for tweaking incline, speed, and distance is not publicly available informationso thatyou would be leftto your own devices. That doesn't make it impossible, though. Like any other type of interval training on a treadmill, it's all about listening to your body.

With that said, such a routine would fall more into the category of regular "high-intensityinterval training." The group atmosphere, combined with the experience and knowledge of the instructors, is what makes precision running so special. When you can tap into the instructor's knowledge and receive both encouragement and guidance on how to improve, you may reap more benefits than training on your own.

If you can, try this class for yourself!

While nothing is stopping you from creating your ownworkout styled on precision running, you can be sure you'll benefit from the group atmosphere. If you're in an area where you can access one of these gyms, give it a shot! Beyond learning about the relationship between speed and incline regardingyour running efforts, you'll gain an effective way to improve cardiovascular health. You might not start off with precision running intending to move on to running half-marathons and marathons—but you might end up there! Whether you're a hardcore runner looking for that extra edge on the competition or an amateur seeking a way to become more comfortable as a runner, this unique take on treadmills has something to offer for every athlete.

This article was written exclusively for Sports Fitness. Shop with us for all you running and exercise gear, and exure your fitness kit is ready for your next workout class.