An Overview of Paralympic Swimming

When the Summer Olympic Games begin, a lot of attention falls on the track and field athletes, especially the fastest runners — but perhaps the most-watched sport every four years isn't on dry land, but in the water. One only needs to look at the popularity of figures such as Michael Phelps to see that swimmers and the dedication they pour into their athletic ability commands respect and thrills the imagination. The non-disabledathletes competing in toughraces to the finish line against each other and the clock aren't the only ones getting their feet wet during the Games, though. Right after the conclusion of the Olympic Games proper, the Paralympic Games kick off with their ownopening ceremonies.

Besides the athletics events at the Paralympic Games, swimming is the most popular and most-watched sport, with vastnumbers of competitors across all classifications. The buoyancy of the water not only provides a more comfortable place to exercise for many of the Paralympic competitors, but it allows them to move and attain freedoms that they might not be able to experience on solidground. For that reason, there is often a great deal of passion and emotion on display, making it excellent for fans and competitors alike. So how does all this work? Here's a quick run-down of all the basics behind Paralympic swimming.

Is there anything fundamentally different about Paralympic swimming?

Generally speaking: not at all! Fire up YouTube and searchswim finals from the most recent Paralympics and you will find that, except for the unique attributes of each competitor, these swim meets look just like any other competition in the Olympics. Though some athletes use specialisedequipment (particularly visually impaired swimmers), most rely only on their willpower, training, and available muscular function to propel themselves through the water. The Paralympics does not allow for the use of floatation devices, for example, so it's all about skill and power. This a big reason why it is so easy to begin watching and enjoying Paralympic swimming — after all, these are normal individuals just like everyone else.

The classifications used to group competitors

As with all Paralympic sports, competitors in swimming fall into one of severalindividualcategories based on the level of impairment they experience. Thisallows for both a safer competition and a more reliable way to judge skill between athletes in fair, honest competition. Swimming uses many of the same distinctions that athletics and other sports do, ultimately breaking down into 14 specific classifications. These classes typically centrearound the limb function available to 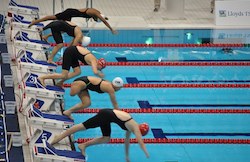 the athlete; therefore, athletes with different conditions may compete in the same categorybased on a similar level of ability. So what are these classes?

First, there are three classes for visually impaired swimmers, differing based on the level of vision available to the athlete. S11 athletes are often entirelyblind and wear special blacked-out goggles during races, while an assistant swimmer known as a "tapper" alerts them to the upcoming turns. S12 and S13 athletes featuring varying degrees of visual impairment, but swim with regular goggles as their field of view is typically satisfactory for swimming.

Next are the 11 classes for physical impairments:

There's no secret recipe or formula to success for these athletes; it's all about hard work, just like it is for Michael Phelps and Katie Ledecky. For visually impaired swimmers who work with a "tapper," of course, there is an element of practice involved as the athletes adapt to receiving signals for where they are in the water. For athletes with a high level of impairment, trainingis all about being more comfortable in the water and building strength in the muscles they can use to swim.

Training always occurs in stages, just as it does with other serious athletes. Long before the Games begin, the swimmers and their coaches develop a regimen for shoring up strength and improvingskill. The intensity gradually ramps up through the early days of training until it reaches a climax perhaps a month before the Gamesopen. Then they enter the period known as the "taper," wherein they train at a lower intensity and less frequently, topreserve their strength and stamina for the big day of their race. Besides this time-tested strategy, Paralympic swimmers continuereturning to the pool day after day, exhibiting the same discipline a non-disabledperson would need to succeed. 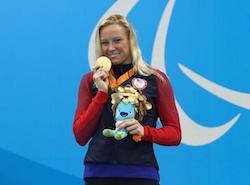 Want to check some of the incredible stories to be found in the world of Paralympic swimming? There's plenty to find— that's for sure. Here are three you should know:

Swimmers are already gearing up for Tokyo 2020

If you've ever tried to swim for extendedperiods, or to go particularly fast, you already know that it's both challenging and exhausting. For Paralympic swimmers, though, the pool is a place of freedom and an opportunity to test themselves and the Games offer one of the world's highest stages for them to do just that. Every four years, new exciting personalities emerge, and some familiar faces join them as well, creating an atmosphere abuzz with excitement as competitors race for gold. With so many events across such a wide range of athlete classifications, too, there's never a shortage of things to watch for those who love to spectate swimming.

This article has been written exclusively for Sports Fitness, shop with us for all your swimwear, goggles, swim caps and other accessories.