Understanding Paralympic Cycling: How Does This Intense Competition Work?

At the competitive level, cycling is perhaps one of the toughest sports out there due to the level of physical conditioning necessary to succeed. That is why races such as the Tour de France receive so much attention and acclaim. For amateur cyclists, the Olympics provide a path to competition that allows them the opportunity to test their skills against tough opponents in the context of international cooperation. However, the able-bodied racers who show up every four years to hit the road and the track aren't the only ones hungry to compete for medals. Shortly after the conclusion of the "main" Olympics, the Paralympics begin in the very same arenas. Cycling is one of the more popular sports at the Paralympic Games, and draws athletes with a wide range of physical abilities, from those with limited sight to athletes who use uniquehand-powered bicycles.

As with many of the sports that take place in the Paralympics, the cycling events are a testament to what the human body is capable of with hard work, training, and dedication. One needs to only look at the teamwork between a blind cyclist and his or her "pilot," or the supreme effort put forward by hand cyclists, to see that just as much passion is on display here than one can see during the standard Olympic Games. So what should you know to understand how "paracycling" works? Here's a helpful primer, starting with the equipment you'll see in play.

The four major types of cycles used in this sport

Paralympians compete in one of four broad categories when it comes to cycling, with more refined classifications within those categories. We'll look at what some of those specific classes are in a moment, but for now, let's focus on the equipment used as it is a large part of what sets Paralympic cycling apart from other versions of this pursuit. Cycles go into categories that correspond to the letters "B," "C," "H," and "T," the same system used to classify athletes. 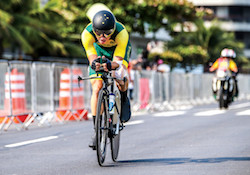 "B" competitions focus on those riders with visual impairments such that they cannot steer the bicycle on their own. "B" cycles are therefore of the tandem variety, allowing the Paralympian to provide the power while a sighted individual actsas the pilot, guiding the bike around the track. Pilots must conform to strict regulations to compete, including rules preventing pilots from engaging in sanctioned non-para competitions.

"C" cycles are, for all intents and purposes, practically your typicalbicycle, usually with some modifications to make it easier for a rider to balance. "C" riders may have difficultywith motor control, some balance issues, or amputations. Some riders, such as recent Rio silver medallist Kyle Bridgewood, rode professionallybeforea disabling injury — and subsequently came back to prominence in paracycling!

"H" stands for "handcycle" and is for those with more complex or multi-faceted disabilities, such as multiple amputations, paralysis such as paraplegia, and others. Rather than using a cycle powered by one's feet, it's all about upper body strength in the handcyclingcategories.Thisis a toughdiscipline — even many able-bodiedathletes would find the regimen arduous and demanding. That makes watching these events even more engaging as you can see the athlete's hard work on display.

Finally, "T" competitors ride tricycles. Athletes diagnosed with cerebral palsy alongside some other neurological conditions which affect proprioception ride trikes due to the much more stable experience they offer. Altogether, these four classes form the backbone of the Paralympic cycling world. So what types of people compete in these categories?

Previously, Paralympic athletes often underwent classification or re-classification at the Games, to ensure that they competed in the correct class. As of the 2016 Games in Rio, that policy has shifted, and all athletes must now undergo an

evaluation beforetheir arrival at the games. By involving licensed physical therapists and physicians, the goal is to create a compassionate but standardisedmethod forlevellingthe playing field and ensuring all eligible athletes have the chance to compete. As mentioned, competitors in cycling go into one of four classes — but did you know that there can be up to 5 sub-classifications in each category as well?

For example, a "C5" cyclist might have a simple above-the-elbow arm amputation or mild weakness stemming from monoplegia, but a "C1" cyclist could experience a much higherdegree of motor control loss. While both compete in generally the same category, it would not be a level field if both cycled against one another. Likewise, handcycle classifications range from H1 to H5, with H1 being the highest level of impairment, usually tetraplegia (defined here as a broadloss of function in the upper arms). An H5 cyclist, however, could include an amputee who simplychooses not to use leg prostheses and to hand-cycle instead.

While the classifications areimportantfor separating competitors into different levels to compete for medals, the reality is that everyone is an equal at the Paralympic Games. Once the starting gun goes off, no one focuseson an individual's disabilities. Instead, the focus is only on what they can accomplish — and just making it to the Paralympics is a significant feat, too.

Training to cycle in the Paralympic Games

How do you prepare for the rigoursof a cycling event? The Paralympics features several styles, from the individual time trial (racers compete against the clock and the times of others) to the pursuit-style race, where cyclists have a certain number of laps to catch up with and overtake their opponents. Some require endurance, while others demand the quick ability to extricate as much power from one's body as possible. Here's the secret, though: these cyclists don't undertake a training regimen that much different from what an able-bodiedindividual would use. That means long, tough rides in special cycling equipment of their own to develop cardiovascular endurance, punctuated with sprint days to increase VO2 max and available power.

Before the Paralympic Games begin, though, many teams often convene to undertake some form of training together. Training camps offer Paralympians the chance to practice in conditions similar to the ones they will face at the Gamesthemselves. With better access to professional tracks, gym equipment, and trainers, teams who set up such camps can allow their members to prepare to be in the best condition for their slate of events.

Who should you know about in this sport? 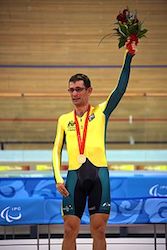 So, what about some famous faces in the field? While not many people enjoy the same name recognition as a Tour de France winner, there are still some stand-out competitors worth knowing. Who are they?

Of course, these three are only a scratch on the surface. With so many cycling classifications, there's no shortage of notable athletes to watch!

The cyclists will meet again in 2020

The closing ceremonies aren't the end of the road for paracycling athletes — in fact, it is just the beginning of the next stage in their journey. For many, that means a return to training as they look forward to the followingsanctioned paracycling events in their home countries. Those who choose to stick with the sport often seekto make their way back for several Games. After all, who would want to pass up another chance at winning a coveted gold medal? The next Paralympic Games will be held in Tokyo in 2020, just after the close of the official Summer Games there. In the meantime, check out the official Paralympics site or browse around on YouTube for some the best highlights from recent paracycling events.

This article was written exclusively for Sports Fitness, shop with us for all your cycling kit and get ready for your next bike ride.