The Most Impressive Guinness World Records in Darts

It's no secret that darts players are incrediblypassionate about their game of choice. A visit to any of the professional, officially sanctioned darts matches will reveal that in an instant: the screaming and roaring crowd that instantly falls to silence when a player approaches the line comes right back to life when the throw lands true. Even your average casual pub match can become boisterous and excitable. The skill and precision necessary to be a good darts player, combined with the need for long-term consistency, means that this is a game where bragging rights are of the utmost importance.

It should come as no surprise, then, to learn that the Guinness Book of World Records contains dozens of darts-related records accumulated from over the years. Now players do not needto argue over who can achieve what — there's always the opportunity to put one's proverbial money where their mouth is by challenging a record. Some of the recordsin the book have stood for years and won't likely see a challenge any time soon; others find themselves actively contested by some of the best players in the world, plus the occasional hobbyist. Want to know more about what some of the world's finestdart players have accomplished? Here are the most interestingrecords in darts that you'll find.

A game for the old and the young alike 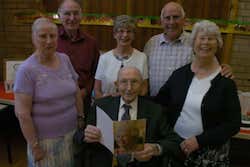 One of the best things about darts is its universal appeal. Whether you're young or old, a man or a woman, everyone can pick up a set of darts, square up to the line, and have fun playing this oldgame. For that reason, the Guinness Book maintains several records relating to players who were exceptional and notable based on their age. For example, consider the case of George Harness, a darts lover from the UK who set the record for the oldest player in competition back in 2016 at the age of 98. Harnesswas still playing at age 100, too, and surely has plenty of great stories to tell about the games in his career.

On the other end of the age spectrum was a young man by the name of Nick Stoekenbroek. Hailing from the Netherlands, he competed in the 2002 Dutch Open and set the Guinness record for the youngest competitive player. At just 12 years old, he not only was able to compete, but to do so at a high level — finishing in the top 5% in a field of nearly 2700 participants. Want to consider something even more impressive? Jelle Klaasen, another Dutch darts player, beat out the best players in the game at 21 years old to take home the BDO championship and the record for the youngest individual to do.

How strong is your throwing arm?

How far do you think you could throw a dart if you tried your absolute hardest? In a standard darts setup, the space between the board and the throwing line (called the oche) measures just a few inches under eight feet. With a decent heft, you can make it to the board no problem — but it's already a challenge to be accurate from eight feet out. What if you had to go even further away? What if you also had to make a perfect bullseye at the same time? If it sounds impossible, that's because it's undoubtedlya difficult feat — but one within the realm of possibility, as proven in 2017 by a British man named Matthew Prouse.

After organisinghis record attempt to raise money for mental health funding and to spread awareness of mental illness-related issues, Prouse squared up, ready to take his shot. His attemptwould be nearly twice as long as the previous record holder. After a tense moment, he aimedand threw — and made the shot! Prouse's bullseye came from a whoppingsix metresaway, or nearly 20 feet. Do you think you could even make it the board from that distance?

Every sport has players who end up being considered "the greatest of all time" by virtue oftheir accomplishments. From famous basketball players to footballers whose names will be rememberedfor ages, some athletes are simply giftedwith the ability to go farther, last longer, and achieve more than their peers. These gifts aretrueeven in the world of darts, and it is why the Guinness Book records a world record for the highest number of darts championships won by a single individual. That honourbelongs to the British professionalplayer Phil Taylor, who by Guinness' tally has won 16 total championships.

His first wins came in the early 1990s when the main body for darts competition was the World Darts Organisation. After sealing his victoriesin 1990 and 1992, he went an incredible streak playing under the new Professional Darts Corporation. For seven straight years, from 1995 to 2002, Taylor dominated the competition and won the PDC championship. After failing to capture a title in 2003, he came back to win again in 2005, and '06. After booking wins in '09 and '10 as well, Taylor won his most recent title in 2013. As of 2018, Taylor announced he would retire from professional darts, leaving behind an incredible record unmatched by any other player.

Accuracy counts: getting on the board, and fast!

As we know, accuracy is vitalin darts, but players are often known for their speed as well. Watch any professional match, andyou'll see that players typically don't take very long to aim their shots. Being fast and accurate is the basis for several more Guinness World Records relating to darts, though just one man actually holds two of them. That man would be Lee Mack, another British player better known for his work on TV comedy shows. His first record, for the most number twos thrown within one minute, clocked in at 18 No. 2s. The other recordMack holds also takes place over a span of one minute — he managed to throw 15 darts into the inner or outer bullseye within just 60 seconds. That's a rapid pace that so far has yet to be broken.

What about finishing gamesaltogether? A player named Mervyn King set an impressive Guinness record on live TV back in the late 1990s. In just one minute and thirty-seven seconds, King was able to complete three full games of darts (a score of 301, checking out on a double). Most professional matches aren't even close to that fast!

Hanging in there for the long haul 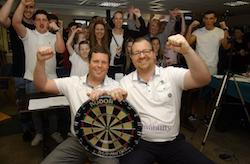 What about players who don't aim to be the fastest, but who instead want to prove that their endurance is stronger than anyone else's? Guinness records several endurance related records for darts, though you might not think of it as an endurance sport. In 2014, two men by the names of Mark Dye and Wayne Mitchell squared up to play the longest marathon of darts they could manage. More than two days later, they tapped out at 50 hours and 50 minutes, setting the record for singles play. Two years later, two teams of two players competed to raise funds for charity while challenging the doubles endurance record. After failing in their first attempt, they succeeded the second time, breaking the record with a time of 49 hours and 29 minutes.

Back in 1998, an American player achieved a feat of endurance that has also yet to be beatenaccording to Guinness: in ten hours of playing darts in a tournament, Perry Prine was able to nail more than 1400 bullseyes. It was 1432, to be precise — a commendable number, but surelyit must have tired out his arm.

Will you challenge a record someday?

Did you know that the Guinness Book of World Records tracks feats that have yet to be attempted? It's true — visiting their website and creating an account can allow you to browse through all the darts records which have yet to be attempted, from the mundane to the outlandish. For example, you could try for the world record for playing a game of darts at the highest altitude possible. Instead of that, you might train to take on one of the recordsthat'salready in the books. Either way, landing in the book is undoubtedlyone of the ultimate ways to earn bragging rights in the world of darts. Next time you head out for a game with friends,arrive armed with some of this fun trivia about the most interestingaccomplishments in the game.

This article was written exclusively for Sports Fitness. Browse our online shop where you can buy darts equipment including darts, boards and flights.