The History, Rules, and Legacy of Basketball

In 2015, the Forbes list of the world's highest-paid athletes saw two boxers (Floyd Mayweather Jr. and Manny Pacquiao) occupying the top two spots. Third and fourth place were occupied, respectively, by football's biggest stars: Cristiano Ronaldo and Lionel Messi. Surprisingly, though, the most well-represented sport on the Forbes top 10 list wasn't boxing or football. It wasn't golf, either, though both Tiger Woods and Phil Mickelson landed on the list, and it wasn't tennis, though Roger Federer ended up fifth and had the highest endorsement earnings of any athlete. Rather, three of the top 10 slots went to another sport: basketball. United States NBA stars LeBron James (who plays for the Cleveland Cavaliers), Kevin Durant (of the Oklahoma City Thunder), and Kobe Bryant (of the Los Angeles Lakers) ranked in at sixth, seventh, and 10th, respectively. The rankings showed the power of the NBA, which, while less profitable than the National Football League, Major League Baseball, and the English Premier League, remains the fourth most successful sports leagues in the world. 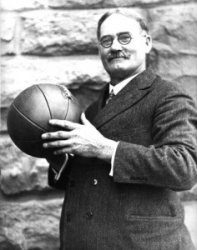 The Birth of Basketball

Needless to say, basketball has come a long way from some fairly humble roots. Like association football, basketball was probably played in some rudimentary form by ancient civilizations. The first game of basketball as we know it today, though, did not take place until the late 19th century?specifically, on January 20th, 1892. While basketball is probably most often associated with the United States?and while the first game of the sport was played in Springfield, Massachusetts, the inventor of the game was actually a Canadian. Dr. James Naismith was trying to dream up a game that students at the YMCA could play during the winter when it was too cold out for baseball. He came up with 13 rules for a game that involved tossing a ball through a peach basket to score points. What many association football fans don't know is that basketball owes at least a little bit of debt to soccer. The tough, heavy-duty orange ball that is now iconic as the basketball obviously didn't exist in 1892?and wouldn't come to exist for more than 50 years. Naismith had to use equipment that was already available to him, which led him to choose a soccer ball for the game.

The Rules of the Game

Naismith's original rules weren't completely representative of the sport we know as basketball today, but they weren't necessarily far off either. Most of the differences were actually due to the equipment being used. The biggest change was that, originally, players were not allowed to bounce the ball unless throwing a "bounce pass" to a teammate. Considering how vital dribbling is to modern basketball, this original rule is interesting and unexpected. However, it's possible that because players were using a soccer ball?which is nowhere near as bouncy as a basketball,it made more sense to focus the game more on passing. With bouncing/dribbling the ball ruled a violation, players needed a different way to advance down the court in pursuit of a basket (or, as it was originally called, a goal). Naismith's version of basketball allowed players to move the ball only by passing it. Once a player had caught the ball, he or she could not run or walk from the spot where the catch was made (of course, an exception was made if the player was running at the time of the catch and had too much momentum to stop immediately.) The player then had to pass the ball to another player before being allowed to run again.A very similar style of play was later adopted for the sport of ultimate Frisbee. 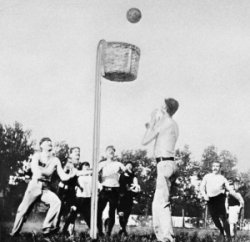 One other major rule shift was also dictated by equipment. In modern basketball, when a basket is made, the ball falls out of the net and to the ground. In the original game, because Naismith was using peach baskets for the goals, the baskets actually had solid bottoms. As a result, the ball could easily bounce or ricochet out of the basket,as it sometimes does off a modern basketball hoop, making it somewhat difficult to score a goal. (As evidence to this point, the first basketball game ever played at the YMCA in Springfield, Massachusetts ended in a score of 1-0.) Furthermore, when a player did score a basket, the ball would have to be fished out of the peach bucket before play could resume.

The number of players on the court also changed. The first basketball game featured 18 players, with nine to a side. That number would ultimately be trimmed down to what it is now: five per side. Length of games, meanwhile, is variable depending on the league and level of play but is always different than what it was originally. One of Naismith's original 13 rules called for two 15-minute halves with five minutes of rest in between. In the NBA, the game is split into four 12-minute quarters, with a 15-minute halftime break. United States college basketball games, meanwhile, are split into two 20-minute halves.

The Growth and Legacy of Basketball

After Naismith introduced the game in 1892, it quickly began to grow, expand, and evolve. Before the first game was over, one of the players had suggested the name "basketball." Soon, the indoor sport had spread to other YMCA centers throughout the United States. In just a few years, it was an intercollegiate sport. And before long, professional basketball leagues began to form throughout the country, as well. It wasn't until 1946 that the NBA came to be, though at the time it was known as the Basketball Association of America. Three years later, "National Basketball Association" became the name, and has remained the name ever since. Today, the NBA consists of 30 teams and is widely considered to be the top basketball league in the world. Furthermore, in addition to having three of the world's top 10 highest paid athletes, studies have shown that the NBA is the highest-paying sports league in the world based on average player salaries. With all that said, successful professional basketball leagues have sprung up all over the world, including in Spain (the Liga ACB), Greece (HEBA A1), Argentina (Liga Nacional de Basquet), Italy (Lega Basket Serie A), and China (Chinese Basketball Association).

Perhaps the most notable factor in the legacy of the NBA and basketball in general, at least in relevance to fans of other sports, is that the league produced the man who is widely considered to be the greatest athlete of all time. As the shooting guard for the Chicago Bulls in the 1980s and 1990s, Michael Jordan won six NBA titles, two Olympic gold medals, six NBA Finals MVP awards, five NBA MVP awards, and many, many other honors. His career stats include a mind-boggling 32,292 points, not to mention 6,672 rebounds and 5,633 assists. Jordan was astonishingly strong, agile, accurate in his shooting, and had a massive leap that caused many to joke about his ability to fly.He could bring out the best of his teammates and did just that by turning the Bulls into a basketball dynasty. He brought basketball to peak levels of popularity, almost single-handedly. He was remarkably consistent, leading Mark Hauser of Bleacher Report to call him "perhaps the only athlete without a real weakness" in a 2009 ranking of history's best athletes. Perhaps most bafflingly, Jordan could have been even greater if he hadn't retired twice in his prime to go try his hand as a professional baseball player.

Will the world ever see another Michael Jordan? Will Lionel Messi or Cristiano Ronaldo be held at similar levels when their careers end? It's difficult to say. Jordan had a mix of skill, athleticism, mental fortitude, competitiveness, consistency, and style that was and is virtually unprecedented. It's difficult to imagine a player in any sport ever accomplishing as much as he did, and that fact alone will preserve basketball's legacy for many years to come.