The History and Evolution of Bike Gears

When you saddle up on your bike and head out for a daily ride for fitness or pleasure, how much time do you spend thinking about the gears between your feet? Unless there's a problem with them, your answer will likely be "not very much." For most road cyclists, shifting gears is second nature and a part of muscle memory, so it makes sense that it would be something one takes for granted. However, did you know that the convenience of modern derailleurs is a relatively recent invention? Bicycles themselves are not very old, with less than two centuries of history on the books, but reliable gears are an even more recent invention.

Consider it: the earliest bicycles, the penny farthings with which we're all familiar, had no gears at all, or even a bicycle chain to speak of; instead, it was all about a one-to-one ratio of pedal strokes to wheel rotations. Naturally, this maderiding incredibly difficult — and dangerous. That's why the first modern-looking bikes were called "safety bicycles." So how did the gear sets we know and love today come about, and how have they changed over time? Let's dive into the history of that now.

The early history of gearing 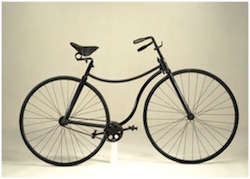 The history of bike gears starts with the history of bicycles driven by a chain from the rear wheel — the "safety bicycles" mentioned above. Crafted for the first time in about 1885, they used a design by a man named John Kemp Starley. These bikes were incredibly simple by today's standards. The first bicycle gears had first been developedroughly a decade prior, but it took the introduction of the rear chain drive to bring them more into the mainstream. Itallowed cyclists the ability to adjust their pedallingpower to compensate for terrain, but early gears were a "what you see is what you get" proposition.

In some early bicycles, one had to physically disconnect the wheel and flip it around to hook in the second-speed gear. Other early variable speed systems also required physically removing the gear and replacing it with another one altogether. Bicycles were a major trend by the dawn of the 20th century, and hundreds of patents for gear sets had been filed by this point. However, the average cyclist still used a single-speed, owing to the difficulty in manufacturing reliable gears and the tedious nature of changing them.

As technology advanced, the hub gear emerged. This self-contained unit contained all the gears and necessary components for advancing through several speeds on the bike. Throughout the early 1900s and up until about 1930, hub gears were the dominant form of bicycle, overtaking and displacing single speeds. In the competitive world, however, hub gears were largely unheard of, and quick-release gear sets that needed to be completely changed out were more the norm. However, it was tough to change gears while pedalling, and the sealed nature of the gear meant that repairs were difficult. Near the end of the 1930s, that all began to change. 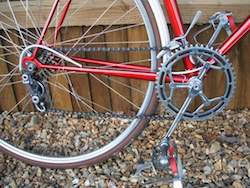 The introduction of the original derailleur

The first precursor to what we know as the derailleur today probably comes from a patent by a man called Jean Loubeyre from France. It laid out the principle for "derailing," or shifting, the bike chain from one sprocket to another. However, it would take many years to refine this technology enough for it to come into widespread use. Professional cyclists looked down on the derailleur as well, choosing to continue riding single speeds even in massively punishing races such as the Tour de France. The idea then was that it was more of a contest of human endurance and making more modifications to the bicycles wasnot considered important.

Up until the 1937 Tour de France, single speeds which required fully stopping and dismounting to change gears remained the norm. However, that year, the Tour de France allowed derailleurs into competition for the first time. However, these were still not the derailleurs we know today, though they did allow for the changing of gears while riding. Instead of a simple switch, cyclists would need to reach down to grasp a lever right next to the wheel. Using this lever, they would physically move the chain from one sprocket to another — a tricky task when you're travellingwhile trying to maintain your balance.

Developments in the world of gear shifting proceeded rapidly after their introduction into the Tour de France. In 1938, the cycling company Simplex sent to market the first cable-shifted system. Rather than using rods, this used a cable and a system of pulleys to tension and movethe chain between gears. It was an important development, leading ultimately to the introduction of the Gran Sport by Campagnolo in 1949, which was a revolution in derailleur technology as it allowed for consistent shifting. However, it was all done by feel: there was no way to use the shifter to transition the chain automatically. Instead, the rider needed to know the right sounds to listen for, and to feel how the bike performed, to know they'd found the right gear.

The rise of index shifting and modern gear sets

This style of derailleur continued up into the 1980s, with friction the primary method used for holding chains on the right gear. That all changed late in the 80s when Japanese cycling business Shimano introduced indexed shifting.Thisis what many people know and love today — a simple system that lets you flick a lever and click easily between the gears. This system revolutionisedcycling in several ways, not the least of which was the fact that it fostered the introduction of highly standardisedgear sets. Everything needed to work in harmony for these systems to work, which meant that old mix and match-style bicycles fell by the wayside.

This advancement opened the door for other changes in cycling gears, too. By the early 2000s, the number of speeds possible on bicycles had nearly doubled. Now 27-speed cycles weren't the stuff of fantasy, but a reality that one could actuallyride. Additional engineering advances allowed for the combination of the braking and shifting levers, allowing for even safer bicycles that allowed the rider to keep their hands on the handlebars continually.

The advent of electronic shifting systems: the pros and cons

So where does that leave us today? The average bike still uses an index shifter, but at the highest levels, electronic shifting products by Shimano are beginning to take the hardcore cycling world by storm. Instead of relying on a mechanical system to move the changes, this electrically powered shifter automatically moves between gears with a high level of precision. Thisreduces wear and tear on your bike by a huge degree, provides for smoother, more reliable shifting, and requires less maintenance overall than a typical derailleur. For the enthusiast or the road cyclist who spends a lot of time tackling different types of terrain, that's a godsend.

Of course, it does require charging a battery every so often — and if you damage the electrical wiring by mistake, it could be an expensive fix. While dirt and grime can't wear out this system like a mechanical derailleur, they can experience other failures that necessitate experienced hands for repairs. That takes some of the DIY element of maintaining your ownbike out of the equation. However, they're a far cry from the single speed bicycles we were using more than a century ago. Where shifting engineering will go from is anyone's guess, but technology such as electronic shifters will play a larger role now and into the future.

The humble gear set has come a long way

It doesn't take a hard look to see that cyclists today are incredibly lucky regardingwhat we have access to when it comes to road bike gears. As electronic systems become even more common, the days of friction shifters and the need to learn the right "sound" for your bicycle fade further into the past.That's a good thing, too — just as no one today would want to go back to the days of bone-shakers and gearless bicycles, these modern methods of shifting are here to stay. What will be the next innovations in this field? We'll have to wait and find out, but whatever it is, it's bound to help us all with performance, power, and comfort in the saddle.

This article was written exclusively for Sports Fitness. Shop with us for cycling clothes, accessories and other merchandise, and keep scrolling through our blog for more fantastic cycling related articles.