The Most Interesting Guinness World Records for Kite Flying

When it comes to family-friendlyfun, flying a kite is simply one of the best and most accessible activities out there. Not only is it easy to get started while also incorporating an element of creativity, but it's simple to learn and easy to continue doing week after week. All one needs is an open space and a steady breeze! For those who choose to take things to a more advanced level, you can quickly find that flying a kite is more than just fun: it can be a huge physical challenge, too. Kites have captured the imagination for millions ofyears — so it should be no surprise they've inspired some people to take them to the extreme.

The Guinness Book of World Records holds several stories about record-setting ventures using kites, from flying tonnes all at once to seeingjust how high a kite can go if you have the right equipment. Sometimes people undertake these efforts for charity, while on other occasions it's simply a personal quest to achieve something awesome. What are some of the records worth knowing? Here's a quick run-down of all the most notable and interesting Guinness Records relating to kite flying.

When one first starts flying kites, it's often a race to see who can let their line out the farthest. With a strong breeze, your kite can disappear up into the sky, becoming a tiny speck—you justneed to be careful to keep holding on to the string! Since the first kites, achieving higher and higher altitudes have been one of the main ways people have broken new ground in this hobby. It should be no surprise, then, that Guinness records several records relating to high-altitude flying.

When it comes to the highest levels ever reached by a single kite, that record belongs to an Australian man named Robert Moore, whose team successfully set the current record on the 23rd of September 2014. After several failed attempts, they finally found success with their kite and an industrial winch coiled up with the cable for the flight. At its highest, the kite flew nearly 4900 metresup in the air — that's half the height that a jumbo jet cruises at between airports!

Almost a century ago, though, another team achieved an even greater feat. While Guinness doesn't officially recognisethis record due to its age, they do mention it thanks to observations made at the time by a magazine called Kite Lines. In a small town in Germany during 1919, a train of eight kites strung together was let loose into the strong wind and ascended higher and higher until it reached approximately 9800 metres. It's a good thing no airliners were flyingat the time,because that's right in the middle of their flight levels. As you can see, with determination, the sky reallyis the limit for kite flyers. 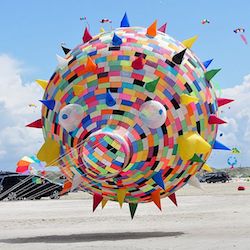 Going as high as possible is far from the only area where kite lovers contest records. Size and speed matter, too. First, think of the biggest kite you've ever seen. It's likely it was an artistic kite, or something designed to provide an impressive visual in the air. For two individuals living in Kuwait, Abdulrahman and Faris al Farsi, these weren't big enough — not by a longshot. For a kite festival held in the Flag Square of Kuwait City in 2005, they put together the largest kite ever seen on earth. With a whopping total area of more than 1000 metres, approximately 950 square metresof space can be usedfor generating lift. At 25 metreslong and 40 metreswide, it dwarfed the crowd at the square. Believe it or not, this kite was even able to fly for a short period.

What about speed? Anyone who's ever gone slicing and diving through the air with their kite knows it can pick up a fair amount of momentum. In 1989, on a windy September day in Ocean City, Maryland, a man named Pete DiGiacomo clocked the fastest speed ever recorded by a kite. In one swoop, it achieves a speed of almost 200 kilometresan hour — about 120 miles per hour. Given that this record has stood for many years, it seems unlikely to be beaten any time soon. The conditions must be just right for the air to propel even well-built kites to high speeds.

Strength in numbers: when many kites take flight

Why stick to flying just one kite when you could fly a bunch of them all at once? That's the question asked by several other individuals who've sought records relating to flying multiple kites. In particular, one hobbyist by the name of Ma Qinghua in China wondered what he could achieve in this area. A kite-maker himself known for fanciful and whimsical designs, Ma Qinghuaset his record on television in 2006, observed by an official Guinness Book adjudicator to ensure proper compliance with all the rules. When all was said and done, he had flown 43 kites, all at once, holding every single string — and somehow keeping them all from tangling and running into one another, too.

What about multiple kites on one line? Students at a junior high school in Aichi, Japan wondered about that question, too, and on Kojima Beach in November of 1998, they found their answer. By tying kites to a long rope at intervals of about 28 centimetres, they were able to fly an incredible 15,585 kites all at once. The site must have been something to behold with so many simple kites fluttering in the air on one long line.

Speaking of incredible sites, we'd be remiss if we didn't mention the record for the most kites ever flown all at one time. In 2011, the United Nations Relief and Works Agency organisedan event to draw attention to the schooling programs they offered for Palestinian children. On a beach on the Gaza Strip, children from schools all over the area gathered to fly 12,350 kites all at the same time. To count, they had to stay in the air for at least 30 seconds. Though 2000 kites fell to disqualification, the remainder stayed aloft, creating a powerful and unified image.

When endurance is the name of the game

Finally, we turn to endurance. Flying a kite can be an exhausting experience in strong winds, especially if your kite has a large lifting area. If you've ever worn yourself out and reeled your kite in after just a half hour of flying, these next records should truly impress you. A team from Edmunds Community college in Washington state once set the record for the longest continuousflight of a kite by a team. By working in shifts to control their parafoil-type kite, the team was able to keep it aloft for an incredible180 hours and 17 minutes. The entire project took more than a week in August and was meticulously managed to ensure its success. There is, for now, no individual record for the longest kite flight.

Do you enjoy doing tricks with your kite? So did Stu Cohen, also from Ocean City, Maryland. In September 1988, he spent an hour performing figure eight tricks with his kite. In total, he performed nearly three thousand — 2911, to be exact. That was more than good enough to earn him this record for rapid tricks. Many other similar Guinness categories remain unclaimed as of now, meaning there are plenty of opportunities left for dedicated record-seekers to get their name in the history books.

Will you challenge a record yourself one day?

One of the best parts of flying a kite is the fact that justabout anyone can try it out if the conditions are right. Whether you already enjoy this hobby or you're thinking of picking it up soon, don't be afraid to challenge yourself to do awesome things with your kites. Whether that's creating a unique and interesting-looking kite or perhaps challenging a record yourself one day is up to you! There are tonnes of kite-related records that the Guinness Book has identified but for which no attempts have yet been made. That means you could be the first to do something incredible — will you?

This article is exclusive to Sports Fitness. Shop with us for your kites and accessories, and check out our social media pages for chat and more regarding a white variety of sports.