Darts: A Game or a Sport?

When you're out at a pub, a few beers in and playing a game of darts with your pals, it probably feels like just that: a game. Believe it or not, though, athletics funding organization Sport England actually considers darts a sport. That fact caused a bit of a squabble last year when enthusiasts of the card game bridge launched a court challenge that essentially asked: "If darts is a sport, why isn't bridge?" According to a report from Reuters, the court challenge was spearheaded by the English Bridge Union. In 2014, the English Bridge Union applied to have their favorite card game recognized as a sport by Sport England. That application was denied, leading to the 2015 court challenge where the EBU attempted to determine whether the denial was lawful. The battle between the EBU and Sport England?and, more fundamentally, between bridge and darts?is a great setup for a new take on an old debate. Is darts a sport? And if it is, do the qualities that earn it that distinction also extend to bridge and other card or "table" games? Let's take a look at the points on both sides of the debate.

Yes, Darts Is a Sport 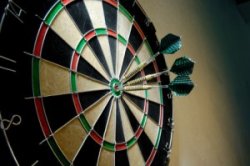 To start, we'll take a look at the arguments for why darts belongs in the catalog of activities considered as sports, not just by Sport England, but also by other comparable organizations. When Sport England rejected the application for bridge to be considered in 2014, they did so by looking at the core definition of "sport." As such, the same linguistic approach could fairly be used to determine whether or not darts qualifies as a sport. Merriam-Webster defines the noun "sport" as "a contest or game in which people do certain physical activities according to a specific set of rules and compete against each other." The same dictionary also has a definition for "sport" as "a physical activity (such as hunting, fishing, running, swimming, etc.) that is done for enjoyment." Those two definitions weren't the ones used by Sport England to deny the 2014 bridge application. Rather, the funding body looked at the Council of Europe's charter on sport, which classified "physical activity" as the definitive characteristic of a sport. There is little denying that bridge?and the vast majority of other card games?is not based in physical activity. Rather, these games are played around a table in a physically relaxed setting.

Therefore, if we take "physical activity" to be the defining quality of a sport, it seems fair to say that bridge is not a sport. The question is whether or not, under the same criteria, darts deserves classification as a sport. Certainly, playing darts requires more of a physical aspect than bridge.The most physical part of a game of cards is shuffling the deck and dealing a hand, usually while seated. Darts involves throwing a projectile accurately at a target while standing. Inarguably, it is the more "physical" of these two games. Often in modern society, we think of "physical activity" as something that involves breaking a sweat and getting the heart pumping. Three of the four pursuits mentioned as examples in Merriam-Webster's second example of the word "sport" meet this conception we have of "physical activity." 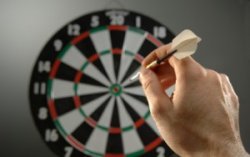 Running a long distance can leave you drenched with sweat, your heart pounding heard. Swimming is incredibly demanding of the muscles and can certainly increase your heart rate. Even fishing, which is much of the time a leisurely activity, can turn into a true athletic test when it comes to reeling in a major catch. It's the fourth "sport" listed in Merriam's second definition that aligns best with darts. Hunting is far from the most strenuous physical activity. Though hunting can involve hiking long distances, the core activity involves lying or sitting in wait for an animal to appear. When the animal does appear, the aim of hunting becomes hitting a target with a projectile?just like darts! In both cases, the core activity is not highly physical in nature. In fact, one could argue that throwing a dart and hitting the bull's eye on the dartboard is actually more physical in nature than pulling a trigger and shooting a game animal in hunting. The important thing to note for both hunting and darts is that they rely on physical skill. Hitting the dartboard and building up points requires a consistency in aim, hand-eye coordination, and muscle discipline. As gun experts and marksmen would tell you, similar skills and discipline are required to consistently find your target with a rifle or bow and arrow.

Therefore, if we substitute "physical activity" with "physical skill"?not quite synonymous terms, but close?we can see that darts does pass that test. With that fact accepted, we can move on to the first Merriam-Webster definition, where darts undoubtedly meets every other piece of criteria for being considered a sport. It is "a contest or game," and does feature people who "compete against each other" "according to a specific set of rules." The bottom line based on these arguments and lines of logic is that darts is a sport. The only point to questioned is whether or not a difficult and disciplined "physical skill" qualifies as the type of "physical activity" that demarcates a sport. In a vacuum, it's clear that games like bridge?while the "physical" element of shuffling and dealing cards is not much less strenuous than throwing a dart?do not require the same amount of physical skill and discipline as darts. Instead, bridge is more about strategy and mental skill or discipline?qualities that are more often considered hallmarks of "games."

No, Darts Is Not a Sport 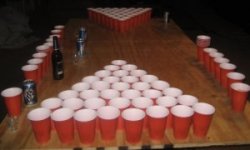 Is our argument for darts being a sport convincing? Whether or not you're convinced, the debate is only half over. Next, we'll take a look at why darts might be considered a game instead of a sport?and why the English Bridge Union might have been right to challenge the lawfulness of Sport England's decision in court. In the court case against Sport England, EBU's lawyer noted that "physical activity is a very uncertain yardstick" when it comes to defining what is and is not a sport. He even conceded that darts demanded more physical skill than bridge, but argued that such a concession was not relevant to the case at hand. Darts is only a sport if your subjective definition of "physical activity" extends to skills that require physical discipline, but are not really physically demanding or strenuous. Someone who would not provide such a definition of "physical activity" would not consider darts a sport. As we conceded above, "physical activity" and "physical skill" are not synonymous terms, which means that there is room to argue that they are, in fact, not connected at all.

Throwing a ball accurately and catching it consistently are both physical skills. However, by itself, catch is considered a game and not a sport. It isn't until the throwing and catching of the ball are integrated into a game like baseball that they become a sport. Sure, darts is more competitive than catch, but if catch were modified into a contest where pairs of catchers and throwers competed against one another to see who could keep the ball off the ground for the longest, would it be a sport? In all likelihood, this activity would still be considered under the umbrella of "catch" and would still be labeled as a "game." To understand why darts isn't a sport, we might look at other games that require discipline in throwing, aim, and accuracy but are not labeled as sports. 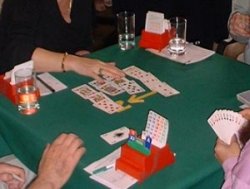 Old schoolyard games like H.O.R.S.E. and P.I.G. come to mind, variations on basketball that challenge players to make baskets from the same positions that other players did. These games require discipline in shooting, accuracy, and consistency?skills that are valuable in basketball?but are not sports themselves. Another example is beer pong, a game commonly played at colleges or universities where players shoot ping pong balls into cups on the other side of the table with the goal of making players on the other team drink. Like darts, this game demands accuracy and muscle memory. Also like darts, it is perhaps most often played in social situations that involve imbibing alcohol. Unlike darts, beer pong is not and will likely never be considered a sport. If beer pong, H.O.R.S.E., and P.I.G. are not sports, there is little ground to label darts as one.

Ultimately, there are good arguments for how darts might be considered a sport?though it is undoubtedly on the borderline. However, Sport England's decision to classify activities as sports or games based on the presence of "physical activity" is too subjective and uncertain. As a result, the organization's decision to reject bridge as a sport might not have been lawful. Sport England, along with other bodies who decide what is and is not a sport, need more clearly drawn criteria to determine where the line between "sport" and "game" should be drawn. Right now, there's no clear boundary, which is why something like darts can earn both classifications simultaneously.