Avoiding the Most Common Mistakes Made by New Runners

For those who don't want a gym membership, need a way to lose some weight, or just don't want to purchase too much fancy equipment, running is the sport that many people turn to for meeting their exercise needs. From the new year's resolution planner to the diligent marathon runner, this fundamental yet challenging activity is an excellent way to work out for individuals across many age groups. While not everyone has the genetic luck and focused ability of a runner like Usain Bolt, it’s rewarding, all the same, to set personal records, go the distance in a race, and meet all kinds of other goals.

Everyone must begin somewhere, though, and when you first start out as a runner, it’s easy to make mistakes. At first, you might simply think it's just about putting one foot in front of the other; before too long, you'll realise there is far more to it than that. To stay on the right track, it's helpful to know how to avoid some of the problems that beginners frequently encounter. No one starts out with the ability to run for miles without stopping — so here's what to know.

Running in the wrong shoes: the #1 mistake

The fact that you don't need high-tech and expensive gear to go running is undoubtedly a significant part of its appeal, but it's critical that you remember you can't skimp on the one piece of equipment you do need: running shoes. Imagine trying to run a marathon in dress shoes or slippers. Not only would it be practically impossible, but going any distance in the wrong shoes can lead to pain and potential injury. Choosing trainers that provide your foot with the correct level of support at the heel, arch, and toe should be a core consideration when you begin to run. Your old ratty pair of sneakers probably won't do, either, because you won't receive the type of support your feet need. Take the time before you run your first mile to shop around for a pair of shoes that fit well and feel comfortable.

Failing to pay enough attention to the correct form

The way you carry your body as you run is one of the most important parts of running. Beginners often exercise poor form which leads to painful and uncomfortable runs. For example, many beginners tend to lean forward as they begin to run downhill. The result is that you risk going too fast, raising the possibility that you could fall forward onto the path. Likewise, during regular running over flat ground, beginners often move their arms too much. Keep your wrists down near your hips and use a short, steady forward and backward motion as you swing your arms. Holding them up too far is a recipe for wasting energy. When you focus on running with a more efficient form, you'll fall into the groove much sooner.

Water is life for every runner — don't forget it 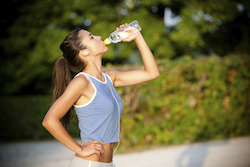 Everyone who runs, even a raw beginner, knows that you'll need to hydrate your body if you want to stay comfortable and efficient. However, many beginners do not take the time to learn about proper hydration. While drinking water throughout the day in place of sugary or caffeinated beverages is preferable, when and how much you drink is also important. For example, don't drain your whole water bottle ten minutes before you lace up for a run. You'll feel the water moving around in your stomach, and it can be both distracting and nauseating. Aim to drink water roughly an hour before your run, and to consume small amounts every ten or fifteen minutes during the run. Afterwards, you can use a sports drink to replenish your body with something tastier.

Don't push yourself too far early in your development

Driving yourself to the point of exhaustion every time you run won't get you the PRs that you want. Instead, it's more likely to raise the possibility of an injury or feelings of discouragement. It's okay if you can't even run a mile without stopping when you first start out. In fact, that's perhaps one of the most common scenarios out there for beginners. If you consistently focus only on what you are not achieving, you'll miss all the joy that comes from seeing what you can achieve. Learn how to set realistic goals and make incremental progress towards them, rather than expecting to exercise natural talent as a runner immediately. With practice and patience, you'll find that running is much more enjoyable.

Running isn't always about going as fast as possible 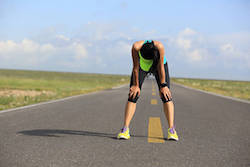 Speaking of PRs, do you want to see your times drop every time you go out for a run? That's another beginner mistake, and it's a notion you'll need to discard early on in your running efforts. There will be days when you're fast, there will be days you break even on the pace, and there will be the slow days too. If you're always thinking about running as fast and as hard as you can, not only will you exhaust your energy before your real potential for distance, you'll also miss other good training opportunities. Sometimes merely working on short distance sprints, or working on how you handle hills, is more beneficial than going for a long-distance run. Focus less on speed and more on general improvement day after day.

Don't hit a plateau and stay there

Eventually, that "general improvement" might seem like it disappears altogether. When beginners reach their first plateau, some just get stuck there forever, thinking they've reached the limits of their abilities. When you've only just begun, that's not likely, especially if you're a younger runner. In these cases, chances are you simply need to re-arrange your training regimen to give your body what it needs to start climbing again. It is important to avoid allowing yourself to become complacent once you've reached your first or even second plateau. You could keep running at that level forever — but won't you always wonder what else you might have achieved?

Running too much is possible! Avoid overtraining

Are you passionate about your newfound love for running? That's great! Be careful to exercise in moderation, though, because running too much is a possibility for many beginners. You don't need to be out on the trail every day to be an effective runner or to improve. In fact, rest is a crucial part of getting better as a runner. After a particularly strenuous run, for example, it's a good idea to allow your body a day or two of rest to recover. Just like when you work out your muscles and need to give them time to self-repair, you should let your body come back up to 100% efficiency between your hardest training efforts.

Eating at the wrong time can make running miserable

Just like with hydration, understanding how to eat correctly as a runner plays a prominent role in your success. If you eat a heavy meal just before a run, chances are you'll end up leaving it on the side of the path. Instead, you want to be able to balance your food groups, eat small, healthy snacks to keep your energy up, and engage in other running-specific dietary practices. Don't try to run without altering your diet at all. Eating nothing but fast food while trying to run a 5k will leave you feeling terrible. As a beginner, look for the opportunity to learn from other runners about their diets and how they balance eating and exercise.

Learn what not to do, then focus on achieving goals

At first glance, it is easy to underestimate how difficult running can be for a newcomer. Sometimes even sticking through the initial period of discomfort and adjustment is the hardest part. If you take the opportunity to learn what not to do, however, and you focus on creating a positive experience each time you run, your chances of success can only increase. Start with a good foundation of proper hydration and the right shoes, then learn how to make running a regular part of your life. From tweaking your diet to recognising when it's time to ramp up the difficulty level, the best time to build good habits is when you're a beginner. Why not get started now?

This article was written for Sports Fitness, an online store where you can shop for running gear at fantastic prices, and with fast worldwide delivery options.