Protecting Your Purchase: How to Choose the Right Lock for Your Bicycle

Take a moment to imagine this scenario which is unfortunately all too common around the world. You ride your bike to run an errand, say to grab some groceries to make dinner that evening, and when you arrive, you park your bike outside. You may even take the extra step of using a lock to secure your bike to a post or other object. When you return from your errand, you step outside and realise with horror that your bike isn't where you left it — it's been stolen. While no one wants to contend with the consequences of a bicycle theft, it happens with alarming frequency.

No bike lock is perfect, but using a weak lock (or worse, none at all) is just asking for unscrupulous individuals to ride off with your prized possession. With the right choice, you can afford your bicycle more security while creating more peace of mind for yourself at the same time. However, there are tonnes of different locks out there on the market, and no shortage of conflicting information on which one is the "best." How can you tell which lock you should purchase? It's all about balancing their pros and cons to find the one that works best for your normal usage. First, though, it's helpful to understand the standards to which bike locks are held.

The question of how to judge the strength of a lock in objective terms has ultimately led to the development of the Sold Secure standard. Manufacturers now create their locks and, usually, submit them for independent testing by the Sold 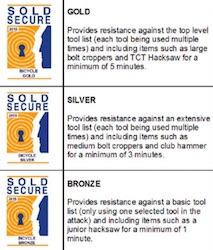 Secure lab which subjects them to a battery of tests. After testing, they arrive at one of three ratings: Bronze, Silver, or Gold. All locks sold under the Sold Secure label must carry one of these ratings, and they make it simple to understand how much security you'll get from them.

At the lowest level, a Bronze-rated lock is the first on the list and is not intended for use in high-risk environments or long-term locking. Bronze locks work best when you only plan to leave the bike alone for a few minutes — even better if you can keep it in sight. An attacker could reasonably be expected to break the lock within a few minutes, making it a security measure that provides more of a visual deterrent than a physical block.

Next are the Silver-rated locks, which are better suited to resisting basic attacks from thieves. These will take longer to break through. Their best applications come when you have access to a bike rack or another object meant for securing bicycles. When you intend to leave the bike for a few hours in a relatively public place, such as outside a building, a Silver lock can afford you with a good amount of protection.

Finally, Gold locks must be able to withstand substantial attack, delaying attackers for longer than other types and holding up to repeated use. While not foolproof, Gold locks offer the best protection but usually also come with a correspondingly larger price tag. If you intend to visit a place where you can't be sure about the safety of your bike, a Gold lock is usually a must-have for your kit.

More than merely useful for telling you how strong a lock is at a glance; Sold Secure rankings can also impact your ability to purchase and retain bicycle insurance. In areas where theft is high or when you've invested a considerable amount of money in your bike, such a policy is a smart idea. However, many insurance companies require you to use a lock of a particular strength based on how much your bike is worth. The most expensive bicycles, such as those used by pros for racing or training, often come with strict requirements that you use a Gold-level lock. Less expensive bikes do not have such high-level requirements, but failing to use a lock will often result in a refusal to pay out your policy if someone does steal your bike. If you choose to purchase insurance, take the time to find out exactly what's required to maintain coverage.

Breaking Down the Different Styles of Bike Locks

So which locks are best? It depends on the situation, how much space you have to carry locks, and whether your bike can accommodate them. Generally speaking, there are three main kinds of locks.

Chain locks: One of the most basic types of bike locks, these were more useful before bike thieves became a breed of their own. Typically consisting of a heavy padlock and a steel chain, they're very easy to use: just loop one end around your bike and then secure it to whatever object is handy. That convenience comes at a cost, though: a thief with heavy-duty bolt cutters or other tools will be able to snap the chain and make off with your bike in no time. Usually, these aren't the way to go.

Cable Locks: A very common and easy-to-use lock, cable locks are just what their name says: a cable, usually made of steel braided into a rope and then covered with a weather-resistant coating, which links to a lock at one end. Loop through your spokes or around your bike and secure it to a rack, similar to a chain. In the "pros" column is the simplicity of these locks, their light weight, and the fact that some can be made quite strong. However, a thief that wants to slice through a cable lock will likely have the tools on hand to do so; these are best used in conjunction with another lock (more on that in a moment) or only for short periods of time.

U-locks (also called D locks): Growing in popularity, U-locks are many cyclists' number one choice when it comes to protection. A simple metal "U" shape connects in to the locking mechanism; loop one end around your bike and the other into the appropriate rack. On the one hand, these locks are incredibly secure and difficult to break — often, getting through one would require the use of power tools which would make the theft incredibly obvious. On the other, though, they 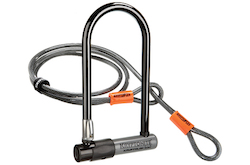 can be bulky and heavy alongside making it more difficult to lock up your bike in areas without racks or other hardware close enough to secure your bike. These are most effective when you can leave only a small gap between the lock and the item used to secure the bike. Even so, most cyclists should have at least one U-lock in their bag.

Keep your bike safe no matter where you go

So, which one should you opt for when making your choice? The real answer is that you shouldn't rely on a single lock alone. In fact, using a combination of the U-lock with a cable lock can give you all the security you need. A truly dedicated thief may still try to attack your bike in the dead of night if you must leave it outdoors, but they'll have a much harder, longer job ahead of them. Other thieves, upon seeing the presence of two locks, will immediately look for an easier target. That's an effective way to reduce your exposure to the threat of thieves. With the right security strategy (and insurance to back you up in the event of a lock failure), you can ride with confidence again.

Whether you think you can get away with relying on a traditional chain lock or you decide to splurge on a cutting-edge and highly durable U or D-lock, protecting your bicycle is what's important. Remember, sometimes the appearance of security can be more important than security itself. All but the most dedicated bike thieves will often pass by targets that seem too difficult. Your goal should be to make it difficult to attack the lock without drawing attention to oneself. Before the next time you take your bike out and park it in public, head down to your local bike shop and browse the locks. Ask questions about the various brands, and seek experiences from others. With the amount that you may have spent on your bicycle, the extra effort to secure it is worth your time.

This article was written for Sports Fitness, shop with us for all your cycling clothing and accessories. Great choice, low prices and fast shipping, take a look at our online store today.