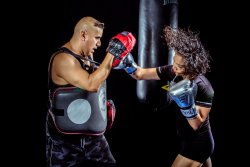 Boxing has transformed in recent years from combat fight between two athletes in a ring to a fantastic way to keep fit for everyone. The techniques used in Boxing have been adapted into a cohesive workout for those who want a more engaging way to keep on top of their fitness. Within this blog we will have a look into the sport and how it can be used in your workout routine for effective training.

Boxing is a one on one sport which is believed to of originated in Egypt around 3000BC. And the first time the sport appeared in the Olympic Games was by the Greeks in the late 7th century. Looking back, we can see that boxing has been a core sport for many hundreds of years and we can see why. Boxing is a sport which is renowned for its focus on a display of physical strength and endurance so there is no doubt that there are new waves of athletes coming to the sport each year with an aim to prove themselves and for validation in the ring. This type of motivation is what keeps athletes and those wanting to get fitter to choose the sport.

The overall aim of boxing is to strike your opponent consistently and in an accurate way which sees them tap out or lose stamina quickly so that you can gain the win. The concept of striking your opponent is what makes the sport considerably dangerous as it can cause a variety of injuries. But in the fitness world it is only the strikes and stances which instructors focus on rather than the impact on the opponent during a class.

The different types of moves are often put together in a repetitive pattern so that you can build muscle and accuracy with each throw. The greater the force behind the strike the more you work your muscles. This is the type of pre-match training boxing athletes would do, but you would not be acting them out on another person unless you are sparring. Sparring would see each side clad in protective head and mouth gear as well as wraps and gloves following a set of moves and instructions from the instructor so that the spar stays safe and prevents injury while still getting an effective workout.

Boxing training often contains repetitive strike movements which have a great force behind them and due to this, you will find a number of health benefits to practising this type of fitness training. Here are just a few physical and mental positive affects you could experience by practising boxing regularly:

How to Get Involved

Above we have explored the benefits and reasoning behind boxing, but now we are going to look into how you can get involved yourself with the training. There are a range of ways in which you can practice boxing, and this is what makes it such an easy sport to get involved with.

One way in which you could do this is by going to your local gym and seeing if they have any trainer led classes with a focus on fitness. Most establishments run a class with elements of boxing included which makes this the easiest way to get involved. But you could also seek out your local boxing club or school and take part in their training, but these classes may be more geared towards those who want to pursue the sport rather than using it as a tool for fitness.

And finally, if you prefer to workout at home, you could always look into following an online workout plan which contains the elements of boxing and guides you through the reps. You can also download fitness apps on your phone or tablet which you can follow to get an effective workout based on boxing. Lastly, you can find cohesive boxing workout DVDs which you can follow in the comfort of your own home too which are led by a qualified professional.

Have You Ever Tried Boxing Before?

Within this post we have covered the how, what and why of boxing, but now we want to know your thoughts on using this combat sport for fitness. Do you use boxing as part of your fitness training or are you tempted to start after reading this article? Let us know over on our social media pages where we would like to find out your experience with the sport. You can also pick up a range of high-quality boxing gear over at Sports Fitness to kit yourself out for your next exercise class