The basics of basketball are easy to learn, but mastering the strategies and skills necessary to play effectively takes plenty of practice. This is part of what makes it such an engaging and exciting sport for young people. Not only does it encourage plenty of physical activity, but it also promotes social development through the team aspect of the sport. There are only so many opportunities to play in organised games, though, and pick-up rounds don't always provide a good chance for structured practice.

So, whether you're in charge of a group of youths playing basketball or you have a child interested in the sport, it's essential to find other ways to fit in useful practice. Having a large stable of drills to run is the key to success in basketball. Not only can drills teach kids the right movements they need to play well on the court, but they can also function as a conduit to physical fitness gains. Sticking to the same two or three drills every week is a recipe for boredom, though ? so what should you incorporate into the mix to keep things interesting? Look at some of these fun and effective drills that kids can handle well. 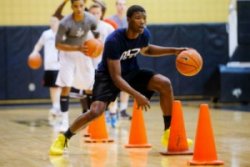 Drills that can help to improve footwork

The best place to start is to look at footwork. Moving around the court with agility, speed, and quick thinking are all founded on good footwork. Without it, it's difficult to get into a good shooting position, and you can be vulnerable to steals and blocked shots.

Rather than merely relying on basic shuttle drills, take your plastic cones and experiment with what you can achieve. There are a few footwork drills in particular that will yield some of the best results: the stop and go drill, the four corners drill, and cone dribbling. Each works to hone specific skills.

The stop and go drill encourages situational awareness, quick pivots, and fast stops. Have players line up on one side of the court with basketballs in hand. Call out "go" and have them begin to advance across the court while dribbling at a normal pace. At random intervals, call out "stop" ? at which point the players must perform a jump stop. After a few stop-and-go drills, start calling out left or right pivots. As the players practice, they'll develop a better sense of where to place their feet and how to move to quickly stop and start again.

The four corners drill is simple to set up but encourages the development of directional agility. Mark out a square with four cones, then place another cone in the centre. Players should dribble towards the centre, jump stop and pivot, then quickly pass to the next line over before rejoining the other players. Keep everyone moving to generate a practised rhythm. Cone dribbling is a classic drill that helps your kids combine all their skills into one fast exercise. It's not a big leap from dribbling between cones to juking past the defending players.

Here's how to set it up: set up a long line of cones, alternating spacing so there is some horizontal distance between each one. Have players dribble the ball quickly down the line, dodging back and forth between the cones. They must not knock any of them over; this forces concentration on both ball-handling and where their feet fall. 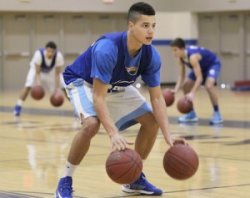 Good control over the basketball is just as important as the ability to traverse the court with skill. While some people have a natural sense of the right way to handle and control the ball, it isn't always so easy to manage. For those who need more practice, drills can be a game changer ? and for everyone else, they reinforce the muscle memory that kicks in during clutch moments and makes a difference on big plays.To develop better ball-handling for your youth players, you'll want to incorporate the double dribble drill, the wall dribble, and the figure-eight dribble.

The double, or two-ball dribble, is perhaps the best way to improve critical ball-handling skills. Youth players tend to favour dribbling with their dominant hand, but that also leaves the ball vulnerable to steals. Switching hands quickly is essential. Give a player two basketballs and tell them they must consistently dribble both balls at the same time.At first, this can lead to a fair amount of frustration, but be encouraging and tell them to keep trying. Eventually, their non-dominant hand begins to catch up, and soon enough they should be able to keep both balls bouncing at the same rate.

The wall dribble is all about improving concentration and response time. A player should take a basketball and try to bounce it against a wall just above their head. The bounce should be short and rapid, like a very abbreviated dribble ? and they should also be walking forward at the same time. Keeping the ball bouncing while also controlling its forward motion is harder than it seems, and it will develop solid skills regarding placing the ball where they want it to be in their hand.

The figure-eight drill is another classic that can help to reinforce the skills developed with the two-ball dribble. By alternating hands when dribbling and passing the ball back and forth between the legs, players firm up all their fundamentals. It can take some practice just to get the motion down, but most students will pick it up quickly. 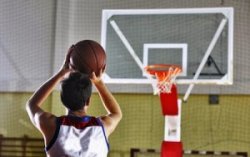 Good footwork and practised handling skills are necessary for success, but they need to combine with accurate shooting skills for a youth player to be successful. Every player wants to focus on shooting anyway ? it's all about making baskets, right? Once they put in the hard work required in the other drills, you can move them on to shooting drills. However, it's important to remember that this practice should focus on shooting under pressure and delivering accurate throws even in the face of a defender. To that end, some of the most useful drills to include are the pivot shot, the chasing layup, and off-dribble shooting.

The pivot shot is all about being able to take a pass and get into scoring position without delay. Youth players may break these actions up into their component parts; this drill is meant to combine them into one fluid setup. A player starts by heaving a chest pass from the baseline to the coach before quickly moving to the free throw line, jump-stopping, and pivoting to receive the ball back. Then they must quickly square up and make a shot on the basket.

The chasing layup drill forces your players to both practice defence and to play aggressive offence. Since layups are an essential part of the game, this will give everyone experience with moving the ball effectively. An offensive player starts with a slight lead on a defensive player; on your mark, they must charge across the court. The defensive player should attempt to make a stop without fouling, while the offensive player must deal with the pressure behind them and focus on making the shot.

Off-dribble shooting is a chance to practice more basic shooting skills that are easy to overlook in favour of more aggressive drills. Players should dribble the ball at the same time as they step forward, then hop with their next step to launch a jump shot. Shooting straight off a dribble requires quick thinking and a practised movement. At first, expect plenty of airballs ? but in time, they'll learn to step up and drain baskets quickly.

When working with kids and doing drills, maintaining interest can be difficult if you only run the same drills every practice session. With the variety presented above ? and with tonnes of other ideas out there on the Internet ? you should be able to come up with practices that are fun, engaging, and fitness-building. While you want to help your kids develop good skills on the court and improve their prospects of winning games in real competition, the important thing is to stay safe, have a good time, and encourage the development of positive traits. Keep that in mind while you put some of these drills into practice, and you?ll have a recipe for success.

This article was written exclusively for Sports Fitness, an online retailing stocking a selection of basketball balls and other essential equipment. Follow @SportNessUK