For some runners, running just onemarathon is a bucket list item that they spend weeks, months, or even years training to accomplish. For others, running one or more marathons a year is a normaloccurrence for them, perhaps with the occasional sojourn out of their local area to attend a bigger, more notable marathon. Hardcore runners may have a laundry list of accomplishments they hope to achieve in their amateur career, from reaching certain time milestones to participating in particular races. Some of those runners place on their bucket list what you might consider one of the ultimate achievements in sports: running seven different marathons, with each one taking place on a different continent.

Not only is this perhaps one of the most uniqueways to see the world,it is also one of the most physically challenging. Running a marathon at sea level in good weather is challenging enough. Now throw into the mix world travel, jet lag, and some very different conditions from what you know at home, and you have a recipe for a truechallenge. It gets even worse, though: the World Marathon Challenge isn't just about running sevenmarathons around the world but doing it all in onlyseven daysas well!

In other words, you'll have to be ready to travel hard and run hard every day for a full week. You'll also have to paya hefty entry fee of €36,000 to secure your spot in the run. Whether you're seriously thinking of taking on this challenge someday or just daydreaming of ticking these sevenraces off your bucket list, here's where you would need to prepare to race.

While some might think it would make more sense to end this challenge at the literalend of the earth, the World Marathon Challenge, in fact, kicks off with this long trip southward to a Russian research station that lies just off the maincoast of

Antarctica. With race day conditions often hovering around a balmy -10C, you can expect this to be the coldest run of the entire challenge. Days later when you're sweating in the heat, you may think back and wonder if you reallydid run a marathon at the bottom of the world. Unfortunately, there isn't too much scenery to soak in while you're running here, though the visit to an Antarctic research station is memorable in and of itself. Once you complete your marathon on the island, you and the rest of the team will board a plane to head north again to the warmer temperatures of Africa.

The first thing you'll notice upon arrival as you recover from your last marathon and prepare for the next is the temperature spike. Race day conditions are usually at or near 25C, which may feel like a sweltering desert to you after running in the frigid cold. Nonetheless, the Cape Town course will allow you the opportunity to see some of the interestingsights around the city as you slog through another race. Taking place on a long strip of land known as the Sea Point Promenade, racers will get to enjoy ocean views and the bracing nature of the salty sea air from start to finish. The sea breeze should help keep you comfortable, something you're sure to appreciate as the reality of the magnitude of this challenge sets in. Running 2 marathons in 2 days is already impressive, but you've still got much farther to travel. Your next plane departs right away to make its way towards Australia.

Perth is a lively and vibrant city, but you won't have too much time to be a tourist as it's time to square up at the starting line. Stretch out your sore legs, down some water, and get ready to immerse yourself in a course that takes you through 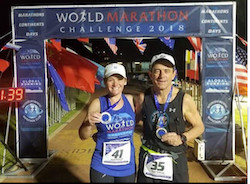 the heart of one of Perth's biggestup and coming suburbs, Burswood. This race starts late in the day, so you'll get to see the city's nightlife bloom as you run after dark. The conditions should be excellent for racing, and weather won't often get in the way — thoughat this point you may no longer be close to posting "personal bests," just reaching the finish line is an accomplishment. After saying goodbye to Perth, it's time for your next flight.

At first, you might think "A marathon in Dubai? No way!" — especially when you've already completed three other races in the days leading up to your arrival in this wealthiest of Arab cities.Known more for its towering architecture than its race scene, you don't have to worry — the weather is decidedly warm, but not overbearing. The course runs through a major shopping and entertainment district in the city known as The Beach for its proximity to the sea. As in Perth, this gives you the chance to enjoy a pleasant breeze while you take in some incredible views that line the course. Make a mental note of places you might want to visit if you ever make it back,because you'll be on a plane to race in Europe just hours after you wrap up at this fourth finish line.

This course, which runs through an area of Lisbon known as the Park of Nations, cuts through a historical area that saw the birth of the city's cultural transformation in the late 90s. At this stage, you may not just feel tired; it's likely more of a state of being! The end is almost in sight, although the jet lag could now be aserioushindrance toyour performance. Put your watch away, stop paying attention to the time, and buoy yourself with the spirits of your fellow competitors—at least, the ones who are still in the race atthis stage! After this race in a land of Latin influence, you can relax and unwind on the long flight across to the Atlantic to your next destination.

A famous port in the days of colonialism and the Golden Age of Piracy, racers will get to experience that history first hand as the course runs through the heart of the city's Old Town.Erected first in the 1500s, this space will now play host to racers who may now wonder why they signed up for such a gruellinginitiative. An early afternoon race, you'll have extra time to rest as you prepare to make the journey to your final destination and the last race of the World Marathon 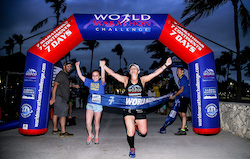 Challenge. The good news: you'll only lose an hour as you transition time zones.

A truly international city filled with rich culture and even better food, Miami is the perfect place to cap off a challenge series that began in the snowy, icy wastes of Antarctica. With a route that runs through the iconic South Beach area of Miami, renowned for its nightclubs and restaurant scene, you can comfort yourself with thoughts of a truly epic celebration once you finish the race. With only about 30 participants in the men’s category in the WMC's most recent running, you can expect to have forged new friendships and discovered more about yourself during this hugephysical undertaking.

Is this the ultimate running challenge?

Although the race has onlybeen heldfor a few years now (it began in 2015), it continues to draw more attention with each successive running. Fields largerthan a few dozen people are still rare, however, and it's not hard to see why: there may be no other physical endurance challenge in the world as punishing and as difficultas the World Marathon Challenge. For the long-distance runner who wants to prove to themselves that they had what it takes to truly"go the extra mile," that makes it a more than worthy addition to any bucket list. Besides, who says that you must stick to the rules? You could always arrange your own personal world marathon challenge with less of a time limit!

This article has been written for Sports Fitness. Shop with us for all your running clothing and accessories, and get ready for your next big race.